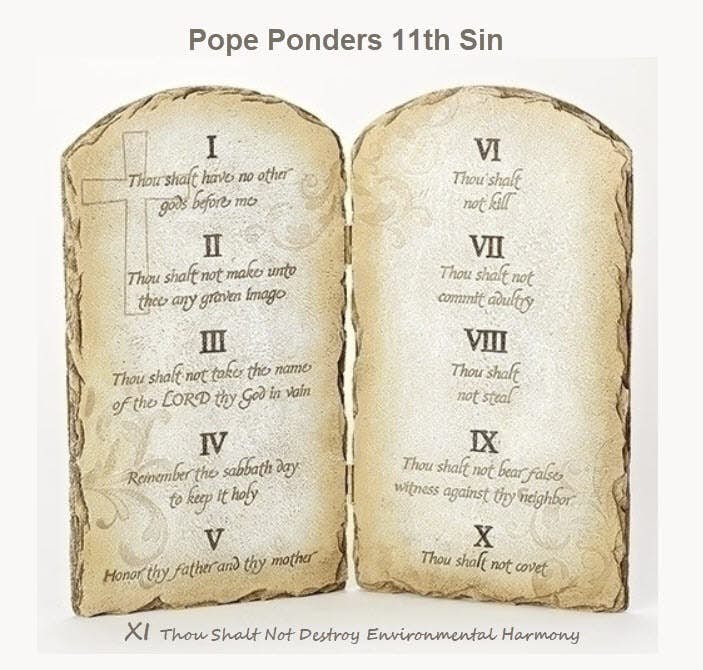 Pope Francis is fed up with deniers, so much so he is on the verge of declaring a new sin.

Pope Francis, who has made the environment a signature cause of his pontificate, said he was strongly considering adding the category of “ecological sin” to the Catholic Church’s official compendium of teachings.

Pope Francis has stressed the importance of environmental protection since his election in 2013. He dedicated an entire encyclical, “Laudato Si,’” published in 2015, to the topic.

In that document, he called global warming a major threat to life on the planet and called for a reduction in the use of fossil fuels. He also blamed the global market economy for plundering the earth at the expense of the poor and future generations.

In 2016, the pope added environmentalism, or “care for our common home,” to the Catholic Church’s traditional seven works of mercy. He also added it to the Beatitudes, the core set of Christian ideals such as meekness and mercy enunciated by Jesus in the Bible, saying: “Blessed are those who protect and care for our common home.”

On Friday, he said he was considering going further. “We must introduce—we are thinking—into the Catechism of the Catholic Church the sin against ecology, the ecological sin against the common home, because it’s a duty,” the pope told an audience of legal experts at the Vatican.

He noted that bishops from the Amazon region meeting at the Vatican in October had defined ecological sin as an “action or omission against God, against others, the community and the environment. It is a sin against future generations and is manifested in the acts and habits of pollution and destruction of the harmony of the environment.”

Thou Shalt Not Be a Climate Change Denier.

Meanwhile, the sun has ‘reached solar minimum’ and its surface is ominously calm.

There’s also a raging debate over whether this will be a ‘grand solar minimum’ with global cooling.

and the World Will End in 12 Years.

But there are only 11 years left now (we’ve already wasted a year), so please repent while you still can.