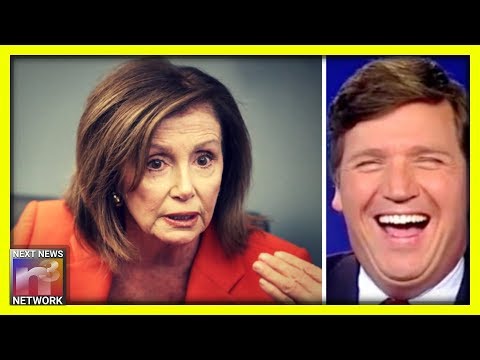 Nancy Pelosi claims to be Catholic.

I was born and raised Catholic and actually spent 3 years in a Catholic Seminary.

This woman needs some time in the confessional badly. 😉

Tucker Carlson recently sat down with Brad Wenstrup (R-Ohio) who is also Catholic and they had some choice words for Speaker Pelosi.

I should note that I am now a non-denominational Christian leaning towards Baptist, but I can tell you that I have nothing but love for the Catholic Church, despite its obvious problems.

The leadership has problems but the people are good people.

So why, as Tucker and Wenstrup pointed out, does Pelosit mock Christianity?

Catholicism is still fundamentally very much against abortion, and she claims to be Catholic?

Carlson made the comments during his Fox News show on Wednesday, during a conversation with Ohio Republican Rep. Brad Wenstrup.

Carlson began by sharing video of Speaker Pelosi, speaking in the wake of the first televised impeachment hearing.

“So I am very prayerful, thoughtful and actually sad today that our country has to come to a place where the president doesn’t understand that Article Two doesn’t say he can do whatever he wants,” Pelosi said.

“A person of deep faith,” Carlson mocked Pelosi. “Member of the church of partial birth abortion, praying deeply. What do you make of that, her repeated professions of faith?”

“I think it’s part of her charade,” Wenstrup responded. “I think about that when she says a lot of things. That she always go back to this. She is giddy about this. She wanted this to happen. She called for this impeachment inquiry before we had the complaint.”

“That’s politics,” Carlson explained. “Why discredit Christianity along the way?”

Read it All at The Daily Caller…

Democrats are now very much a party of anti-Christians.

Even those like Pelosi who claim to believe, pervert the teachings of Christianity.

Americans had better wake up to what is going on because Democrats have us all under a “Vampire in Brooklyn” type spell.

Yes, but so many of our public servants have us under the same spell.

Abortion is murder and we have a lot of blood on our collective hands.

Those of us who are Christian can’t help but wonder if the end times are near.

How much worse can it get?

Our society is sick and there are lots of people who claim to believe, like Pelosi, while justifying whatever is convenient to them personally.

Thank God for men like Tucker Carlson and Brad Wenstrup who still have the courage to speak out, while so many anointed members of the clergy are pushing this evil.

We can not remain silent while the false prophets continue spreading their lies.