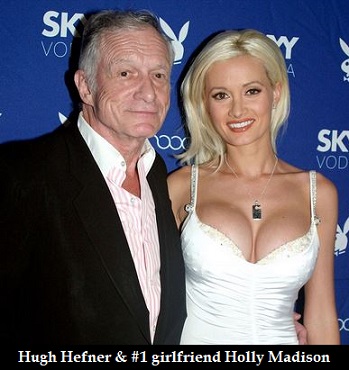 Playboy magazine, founded by Hugh Hefner in 1953, sold men (and women) the illusion of the promiscuous “playboy” lifestyle as glamorous and desirable. Nothing epitomized that lifestyle more than Hefner’s Playboy mansion in Los Angeles.

But Hefner’s #1 girlfriend, Holly Madison, 39, said that life in the Playboy mansion made her want to kill herself.

Madison’s work as a waitress at Hooters led to an invitation to move into the Playboy mansion when she was 21 years old. A year later, she “graduated” from being one of 75-year-old Hefner’s girlfriends to be his #1 girlfriend, whatever that means.

Insecure about her looks, Madison had a nose job and breast implants to boost her breasts from A to D-cup.

Madison said she wanted to marry Hefner and have his children, but in an interview at the Playmate of the Year luncheon in May 2008, Hefner said that although he loved Holly “very much” and they would be together the rest of his life, “marriage isn’t part of my puzzle.” Five months later, Madison announced that her relationship with Hefner had ended.

Fr. Mark Hodges reports for LifeSiteNews that in her 2015 memoir, Down The Rabbit Hole: Curious Adventures and Cautionary Tales of a Former Playboy Bunny, Madison said her promiscuous lifestyle of “hollow emptiness” at the Playboy mansion led her to deep despair and the point of suicide.

She said that the seemingly glamorous life at the Playboy mansion, watched by millions on television, was in reality “vacant” and a “nightmare”. There were cat fights and backstabbing among the Playboy “bunnies” because Hefner worked the girls against each other. She felt trapped in the mansion, and saw its entrance gate as “meant to lock me in.”

Describing Hefner as “a man old enough to be my grandfather,” Madison wrote that while in the bathtub one day, she thought, “If I just put my head under water and take a deep breath in, it would all be over. Maybe it was the pot and the alcohol, but drowning myself seemed like the logical way to escape the ridiculous life I was leading. I just couldn’t take my misery anymore.”

Madison said she believed that, with one possible exception among the other Playboy bunnies, no one would miss her: “Of course my family would be devastated, but I rarely saw them enough for my absence to make a difference.” Nor would Hefner care because “I was certain I was just another warm body – as we all were. ‘Just another blonde,’ I could hear him say.”

Madison ultimately concluded that suicide would be in vain, because it would just be “swept under the rug,” just like every other “scandal and ghost that once plagued Hugh Hefner.”

A mother of a girl, 6, and boy, 3, with Pasquale Rotella, Madison is now divorced. She told US Magazine that she wants her daughter to “hopefully learn from [her choices] and not make stupid mistakes herself.”

Meanwhile, another Playboy alumnus, former Baywatch star and Playboy playmate of the month Donna D’errico, 51, also turned away from her previous lifestyle to become a devout Catholic who goes to Mass every week and prays the Rosary every night with her two children.

In a Fox News interview, D’Errico said: “I’ve made mistakes and choices in my past that I wouldn’t make today. That’s a chapter in my life that I’ve closed the door on. It seems to me like another person. It’s not who I am today.”