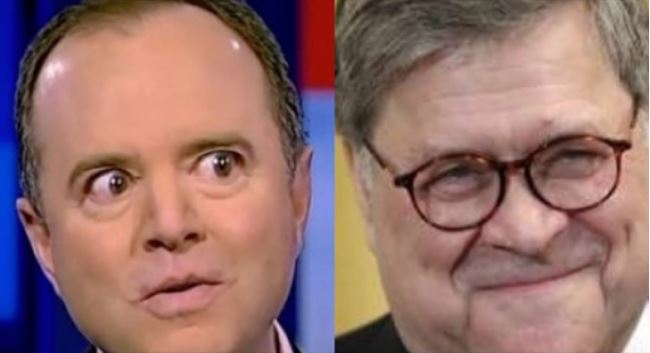 Opinion| Lawrence David| While we’re waiting for the Inspector General’s report on FISA abuse for illegally spying on Amercican citizens, including the President of the United States, and, to learn who the targets are of U.S Attorney John Durham’s criminal investigation of Obama administration officials who conspired to destroy a political opponent, the media is conveniently ignoring that discussion and attempting to criminalize a corruption probe by the POTUS, instead.

Adam Schiff (D-CA) is running a Stalinist-style show trial in an attempt to create a groundswell of political sentiment in what amounts to the third, or fourth, or fifth or sixth, official inquiry of President Trump.

Schiff controls how Republicans use our question time.

Schiff controls what gets released from his secret depositions.

Schiff shuts out witnesses who would contradict his one-sided narrative.

This is what Pelosi is calling fair? It's a sham. pic.twitter.com/c8gDlO1QE7

That the mainstream media is not just allowing Schiff to run a one-sided show trial, but actively supporting it should stand as a stunning rebuke of the once vaunted Fourth Estate because it highlights its role in a much wider conspiracy.

It should be clear to everyone who is awake that the mainstream media is part of a massive effort to defraud the American people.

The same media that now attacks President Trump without evidence and by ignoring existing law, has dutifully defended the criminals who plunged us $10 Trillion deeper in debt while they held power.

How did that work out?  The middle class shrunk and those in need of welfare and government assistance expanded.  But the media told us that the DOW was up and therefore the economy was just peachy and to take comfort from the new reality.

There are employing the same deceptive reporting today, against the peoples’ best interests as they did in defending the Obama nightmare.

It’s bribery!  Pelosi said it and the media repeated bribery, bribery, bribery without giving a second thought to the hypocrisy behind what she had told them to say.  Steve Hilton proceeds to point out what bribery looks like:

What do you think a political donation from a business or a lobbyist or a corporate PAC is?  It’s money in exchange for a political favor. It’s a bribe!

-Adam Schiff took over $350,000 in bribes from the defense sector and surprise, surprise, pushed for military action overseas.  Schiff took over $100,000 from A.T.&T. When it was reported that President Trump wanted to block the A.T.&T. – Time Warner merger guess who piped up on A.T.&T.’s behalf?

-The Queen of Bribery [is] Nancy Pelosi.  She boasts about her fundraising prowess.  Raising money is the way she clings to power.  Her office proudly told the New York Times earlier this year that she’s raised over $700 Million since 2002.  Does anyone think that money is anything other than bribes?

It worked for Visa.  In the 2008 cycle, they gave over $100,000 to Democrats on top of the fact that Nancy herself snagged some preferential stock in the company.  Those bribes helped persuade Pelosi as Speaker of the House, to kill off legislation that would have cut Visa’s revenues.

And then there’s the foreign bribes including, unbelievably, the fact that Pelosi has taken money from lobbyists representing shady companies in Ukraine.  My God!

Bribery, thy name is Nancy.

President Trump warned us that the relationship between the Washington establishment and the media was a toxic one during his campaign.

Nothing that has transpired over the past three years has proven candidate Trump was wrong when he said:

“The Washington establishment and the financial and media corporations that fund it exists for only one reason, to protect and enrich itself.”

If anything, the past 34 months has proved that the Washington establishment will do anything – A.N.Y.T.H.I.N.G. – to protect the con game that Obama, Clinton, Pelosi, and Schumer are running.

The mainstream media has proven, conclusively, that it will defend the corrupt Washington establishment with any propaganda talking points they are told to repeat, no matter how badly it damages the republic and/or the people therein.

On the local level, when a single prosecutor, judge, or politician allows money to influence their actions, they become the target of a corruption probe.

In Washington, when they commit those crimes it’s excused as lobbying, business as usual.

When they do it en masse, it’s called a political party.

When a political party leverages their government appointees and like-minded bureaucrats to conduct illegal operations against their political opponents, the media dismisses it as politics or explains those illegalities were necessary to protect the State.

Funny how protecting the State always ends up in the loss of individual rights.

Never in the history of the world has a set of evidence better aligned with the definition of Racketeer Influenced and Corrupt Organizations Act (RICO) than the evidence against the current Washington establishment being led by Nancy Pelosi.

President Trump’s attorney, Rudy Giuliani is among the most accomplished RICO prosecutors in American history.

Let’s hope that when the dust clears on this ludicrous “Schiff show” Rudy and U.S. Attorney General William Barr will begin enforcing the RICO statutes.  Because as Pelosi has told us many times in the past, “No one is above the law.”