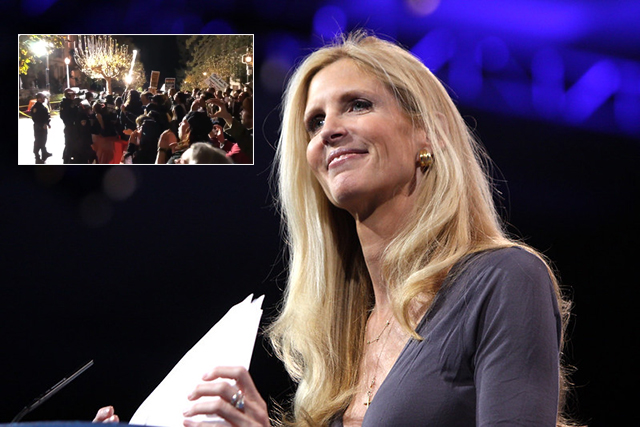 The mob was filmed screaming various epithets at the top of their lungs at Coulter, Berkeley cops and speech attendees.

FIGHTS BREAKING OUT AT @UCBerkeley. PROTESTORS GETTING ARRESTED. pic.twitter.com/xean2kzfKO

The mob managed to block multiple attendees from getting into the event:

An event attendee attempts to enter Wheeler Hall but is quickly stopped by protesters with linked arms #Coulterprotest pic.twitter.com/cJ0rP2tn3Z

A young woman was not only blocked by the mob but had her ticket stolen:

People cheer as a woman attempting to enter the event is turned away by protesters #Coulterprotest pic.twitter.com/jLSm8oaXKW

A man attempting to enter Wheeler Hall flashes a “Trump Pence 2020 shirt” after failing to get into the event venue #Coulterprotest pic.twitter.com/zDhFjo7lK0

“Free speech” yells an event attendee as he jumps the barricade to enter the event #Coulterprotest pic.twitter.com/No3grRWM3Y

Ann Coulter waltzed right into the event with a full police escort:

If you look closely, you can she Coulter was beaming from ear to ear!

Coulter made light of the protests at the start of her speech, reportedly saying: “Another warm welcome at Berkeley!”

Ann Coulter has begun speaking. “Another warm welcome at Berkeley,” said @AnnCoulter after she was introduced. The media is not allowed to record her speech. Ground rules for entry. pic.twitter.com/4XuMAb8GzI

Some unhinged leftoid interrupted Coulter’s speech only to get swiftly arrested. The empowered feminist immediately started crying after police put their hands on her.

Within minutes, a protester began yelling at @AnnCoulter. She was handcuffed and dragged out. pic.twitter.com/Uw9EstOxbN

She IS a fucking Nazi!

Drive these fascists off campus &
OUT OF THE White House.

Ann Coulter’s event two years ago reportedly cost UC Berkeley $800,000 for security but it was canceled at the last minute by the Young America’s Foundation due to security concerns. YAF won a lawsuit against Berkeley last year forcing them to abolish their heckler’s veto.

I didn't cancel. YAF canceled without asking me. https://t.co/MafrgA6xnJ

YAF not involved tonight. The show will go on! https://t.co/t8Zotf5xqM

Wednesday night’s event was put on by the Berkeley College Republicans.

More than 2000 protestors showed up outside our @AnnCoulter event tonight but we were undeterred. We would like to thank all our attendees, especially those who got punched and kicked while waiting outside. Your contribution to protecting free speech on campus is invaluable! pic.twitter.com/p10GdhIFh7

Here’s more of the idiot mob:

It looks like we got to the north side of Wheeler Hall just as things are heating up #Coulterprotest pic.twitter.com/tV4zmwAIWd

Officers lead the woman away into Wheeler Hall #Coulterprotest pic.twitter.com/h1qxfLuVbV

“Berkeley is a sanctuary. No Coulter, no ICE” protesters chant in front of Wheeler Hall #Coulterprotest pic.twitter.com/qpsyhpO2PE

Berkeley resident Jose Robles said he approached the barricades in front of Wheeler Hall to ask UCPD how to get into the event, when he was allegedly “accosted” by protesters #Coulterprotest pic.twitter.com/pdAycYouoR

Crowd chanting "what do we want? Open borders! When do we want it? Now!" Outside Ann Coulter's speech. #outnow pic.twitter.com/YjzIjpsLPb

Leftoids are also working to kill the Joker meme:

Keep up the great work, Ann!