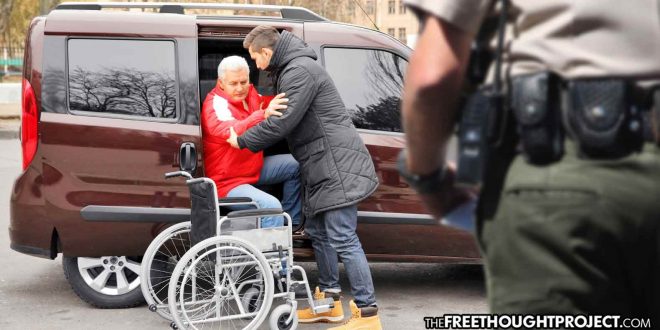 In the Land of the Free, if you do not pay the State before you attempt to sell a product or service to a willing customer, you can and will be extorted, kidnapped and caged, with extreme prejudice. As the following case illustrates, even if this service helps those who cannot help themselves, you can still be subject to the state’s wrath.

Uber and Lyft are two paradigm shifting companies whose rideshare apps have prevented countless DUIs and provided low cost transportation to many who’ve never had access. There is one problem when it comes to these rideshare apps, however, and it’s that you need a smartphone to access them. Tens of millions of Americans do not have smartphones. The elderly and the blind are two key demographics who do not use smartphones as much as others.

That’s where GoGo Grandparent comes in. GoGo Grandparent, piggybacks on Uber and Lyft, hiring operators who can take riders’ requests on standard telephones, via push button menu, or by voice. The operators arrange the trip, charging 27 cents a minute over the ride-hailing fees. The company’s founder, Justin Boogaard came up with the idea to help his grandmother order an Uber. The idea was a hit.

Their inexpensive service has been widely accepted and has grown the company from a novel idea to a successful business in the last few years. While their success is welcomed, the attention it garnered them from the state is not.

In February, the Consumer Protection and Enforcement Division (CPED) of the California Public Utilities Commission—the state body that regulates transportation network companies like Uber and Lyft—issued a citation to GoGo Grandparent for operating a for-hire transportation service without permission.

Regulators demanded that the company pay a $10,000 fine and obtain the necessary permit to run a transportation network company, which would involve getting $1 million liability insurance for its vehicles and handing over lists of its drivers to the state.

“Our response was: That’s crazy,” said Tom MacBride, GoGo’s lawyer. “GoGo is just helping the person order a ride; the rider is covered by Uber and Lyft insurance. The Legislature never intended to pigeonhole companies into regulations they can’t possibly comply with.”

Their niche involves putting people in contact. They provide a toll-free hotline that their smartphone-less customers can call to order an Uber or a Lyft. Despite the company’s successful business plan of connecting seniors and the disabled with rideshares, which has garnered them coverage in the NY Times and TechCruch, the State of California wants their cut and GoGo Grandparent may go out of business.

“I can schedule a same-day trip and modify it that day, which is very convenient,” Mike Levinson, 67, of Daly City, a retired computer programmer who is legally blind and doesn’t have a smartphone said. If GoGo went out of business, “it would virtually eliminate my ability to have same-day rides without taking a regular cab, and it would reduce the flexibility I have to change ride plans.” A cab is more expensive, he added.

After they received the letter of extortion from the State of California, GoGo Grandparent appealed.

“GoGo allows a flip phone to act as a substitute for a smartphone for the rider summoning a ride through a [transportation network company] such as Uber or Lyft,” says the appeal, which notes that the company neither employs or contracts with drivers, according to Reason. “For the [Public Utilities Commission] to regulate them would be equivalent to regulating a smartphone or the Google Alexa Device or a computer code.”

During the appeal, the judge called the commission’s argument that GoGo was a transportation company, absurd.

“There is no rational basis to require GoGo to maintain liability insurance as an additional source of compensation in the event of a passenger injury,” Hallie Yacknin, an administrative law judge with the state utilities commission, wrote in her decision.

This was good news, until some very fishy things started happening in the background.

According to the SF Chronicle:

Under commission procedures, that decision was placed on its consent agenda, slated to be adopted by the full commission without further discussion. But the matter was inexplicably postponed three times. It’s now on the Dec. 5 calendar.

Terrie Prosper, a commission spokeswoman, said in an email that agenda items are often held for further consideration.

That was disputed by MacBride, who has specialized in utilities commission cases for 44 years.

While a single hold may occur, he said, “a series of holds is unusual and is usually reserved for big-ticket rate-setting or policy matters.” Repeated holds are particularly uncommon in citation matters such as the GoGo case, which are supposed to be perfunctory.

MacBride said he’s particularly troubled that the holds may be caused by commission staff requesting them from a commissioner. That would be a violation of due process, he said.

The Consumer Protection and Enforcement Division, which requested the fines, “can be a prosecutor or it can be an adviser, but it can’t be both,” he said. “The bottom line is that GoGo is precluded from responding to anything (that division) is saying internally at the commission.”

For the thousands of elderly and disabled folks who rely on GoGo, this behind the scenes acting could mean their convenient rides will soon be coming to an end. Boogard agrees and says that the holds show “something is happening behind the scenes that in this case could spell doom for GoGo.”

And just like that, a beneficial company that provides a unique service to those who heavily rely on it, may be squashed out of existence thanks to bureaucrats within the state who want their cut.