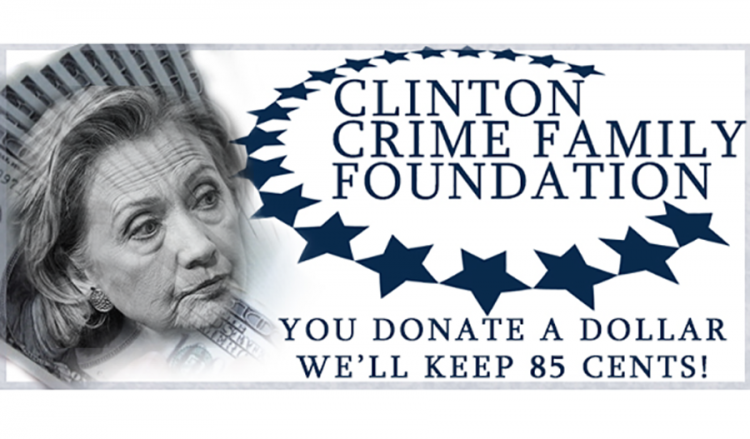 It looks like the Clintons continue to spend way beyond their means as the Clinton Foundation continues to lose revenue following her miserable defeat in 2016 and the exposing of her crimes, as well as the quid pro quos she engaged in while serving as Secretary of State.  In fact, it appears from tax returns that the Clinton Foundation has dwindled from where it previously was just a few years ago.

The Clinton Foundation reported $30.7 million in revenues in its recently-released 2018 Form 990 tax return, the lowest figure posted by the charity since 2002 when it raised $25.6 million.

The foundation’s 2018 revenue was just 12% of the $249 million it raised in 2009, the first year of Clinton’s tenure as secretary of state under former President Barack Obama.

The Clinton Foundation also posted its third straight year of losses of $16 million or more in 2018, bringing its total losses since 2016 to $49.6 million.

Additionally, speaking fees billed through the Foundation also fell 90% since 2014.

The $30.7 million in revenue is the lowest amount the foundation has taken in since 2002, when it had $25.6 million in total revenue.

The federal Form 990 tax return filed by the foundation said its assets dropped from $329.7 million at the start of the year to $299.5 million by the end of the year.

However, major donors have not forgotten the foundation. Open Secrets said nine people were responsible for giving the foundation $11.9 million in 2018.

When Twitter got word of the losses, speculation abounded.

This is so weird because I was assured many times on CNN by very smart Democrats that the Clinton Foundation was a blameless charity and had *nothing to do* with selling influence or access https://t.co/YvaRCGfA29

“Our entire 990 shows our work was fully funded by donations, grants, savings from prior years, and interest from our endowment,” Cookstra said.

“In the last year, the Clinton Foundation’s programs have grown to help more people, and we are committed to operating programs that are effective, efficient, and sustainable,” he said.

The Clinton Foundation is currently under investigation by the FBI.

However, concerning money, just keep in mind that donations to the Clinton Foundation from the Ukraine were more than any other foreign country, and that should matter in this season of the dog and pony show impeachment hearings and it is certainly questionable whether or not the Obama DOJ pressured a shutdown of an earlier investigation on the Clinton Foundation.