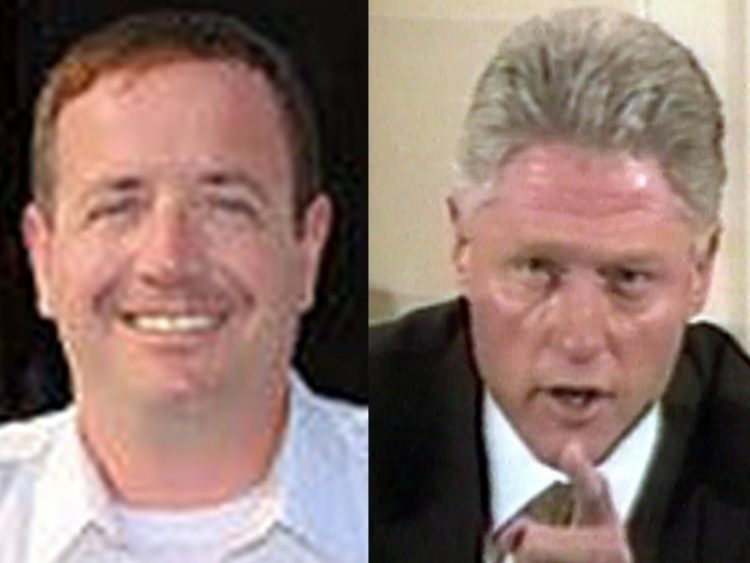 A former escort pilot to former President Bill Clinton, and owner of an aircraft charter company that move to the Mid-Carolina Regional Airport in Salisbury, North Carolina, has been arrested and put in jail in Georgia, charged with a list of sex crimes, including sodomy, statutory rape and aggravated child molestation.

Steven Robert Setzer, owner of Strategic Moves in 2015, is in jail in Chatham County, Georgia.

Police charged Setzer in May with enticing a child for indecent purposes, sexual exploitation of a minor, aggravated child molestation, sodomy, and statutory rape.

As is becoming more commonplace, the victim was not a girl, but a young boy.

Breaking: Charter flight company based in Rowan ceased operations citing "loss of clients." Just found out the owner has been in jail since May on long list of sex crimes charges involving children. https://t.co/VjlD43yBmr pic.twitter.com/LYys0W9XNt

According to the incident report, Setzer was seen walking with a 14-year-old boy in the woods near a Georgia church.  Originally, the boy told several “contracting” stories, according to the report.

However, when police went to the area, they discovered several used condoms on the ground.

That’s when police brought the teenager and Setzer in for further questioning, ultimately resulting in Setzer’s arrest and charges.

Strategic Moves ceased operations at the end of October and will vacate its hangar lease agreement because of “financial difficulties and the loss of clients,” according to The Salisbury Post.

The company was expected to bring 15-17 jobs and tens of millions of dollars of aircraft to Rowan County when it moved from Statesville four years ago. At the time, it was anticipated that Strategic Moves would pay Rowan County nearly $7,000 per month to lease space at the airport.

Setzer’s bio indicates that he is a retired U.S. Marine Corps pilot who served on the crew of the Presidential Helicopter, Marine One, supporting the White House and President Clinton.

According to that bio, while with the Presidential squadron, he learned that even the smallest detail must be monitored, according to the company web site. His ability to provide support to VIP’s has been well tested in an environment that only the best are chosen to contribute to.

As a Marine One Maintenance Officer and Functional Test Pilot, Steve was one of a select team authorized to certify the President’s helicopter as safe for flight following a maintenance action, according to the bio.

Thank you for your patronage and loyalty over the last 15 years as clients of Strategic Moves. Strategic Moves has discontinued operations as of 10/31/2019. Many of our clients have transitioned to Davinci Jets who are capable and excited to provide an excellent level of service.

The company also provided a statement to its workers following Setzer’s arrest, which WBTV obtained.  It reads in part:

In the latter part of May 2019, Steve Setzer, the founder, president, and owner of Strategic Moves, took an indefinite leave of absence from flight duties and day-to-day operations of the company to attend to an important personal matter.

On May 20, 2019, Steve was arrested and charged in Chatham County, Georgia with a series of offenses arising from the prosecution’s allegations that, while on a training trip, Steve communicated with and then met an individual he met through a popular adult dating app.

Prosecutors allege that Steve engaged in relations with this individual, and that — contrary to what the individual listed on their online profile, what they may have represented to Steve, and even what they repeatedly told police on that day — the individual was not in fact 18 years old, as was represented on so many instances. As a result of these allegations, Steve faces charges under Georgia law. It bears mention that even if these allegations were true, such behavior would not even constitute a crime in many states. And in many more, authorities discharge good judgment and apply the “strict liability” crime only where it is truly warranted — i.e., where a person intentionally engaged in behavior with an underage individual. But while that process unfolds, the Strategic Moves family will continue to hope and pray for a just outcome for Steve.

In the meantime, while our hearts, thoughts, and prayers may be with Steve in Chatham County, Georgia, our focus remains squarely here — serving the most important component of our business, our clients. Some disruption was inevitable over the past few months, but we are confident that our clients will enjoy the same excellence in client service they have always known from the team at Strategic Moves, even during this period of transition.