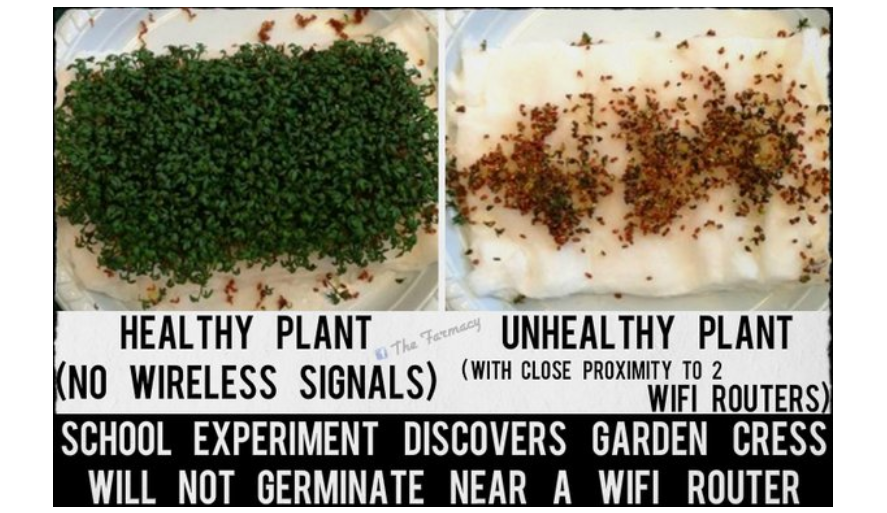 Our children are our future and many of them are concerned with advancing technologies and their UNTESTED and UNDOCUMENTED potentially harmful, if not fatal, side effects.

People around the world are extremely concerned with the potential harmful effects of the 5G rollout, but how many people are discounting the dangerous technologies we already have, such as our current Wifi (minus 5G).

First let’s start with a group of American school kids who tested Wifi against sprouting seeds.

They had a control and a set of seeds being exposed to Wifi.

What do you think happened?

Watch and see for yourself.

Pioneers Of Science – Part 1 from Smooth Feather on Vimeo.

Isn’t that just a little troubling?

And now they will be beaming, a more powerful, 5G signal down on all of us.

On the other side of the world another group of school kids ran a similar experiment.

This is from 2013 and was done by school children in Denmark.

If you don’t think our scientists have tests to see the effects of Wifi on plant growth then you are probably a bit naive.

I believe there is an agenda in play and you do not have to be wearing a tin foil hat to see it.

A group of schoolgirls claims to have made a scientific breakthrough that shows wifi signals could damage your health – by experimenting with cress.

In a twist on the traditional science project of growing cress on a paper plate, the 15-year-olds set out to test whether mobile phone signals could be harmful.

They say the result could affect millions of people around the world.

Pupil Lea Nielsen said: ‘We all thought we experienced concentration problems in school if we slept with our mobile phones at the bedside, and sometimes we also found it difficult sleeping.’

However, because they were not able to monitor their brain activity at their school in Denmark, they chose to monitor plants near wireless routers, which emit similar radio waves to mobile phones.

When the girls grew trays of garden cress next to wifi routers, they found that most of the seedlings died.

Over 12 days many of the seedlings in the wifi room turned brown and died, whereas those in the others room thrived.

But critics claim that the cress seedlings left next to the routers probably struggled because they were dried out by heat emitted from the devices.

Kim Horsevad, the students’ biology teacher at Hjallerup School, said: ‘This has sparked quite a lively debate in Denmark regarding the potential adverse health effects from mobile phones and wifi equipment.’

The results will bolster the findings of researchers in Holland, who found that trees exposed to wireless radio signals suffered from damaged bark and dying leaves.

Again, what is 5G going to do to us if current Wifi is already harming our vegetation?

Most conservatives don’t care about such things but they should.

Not everything Trump does is necessarily smart.

Trump is not only a big 5G endorser, he’s ready for 6G.

I am one of Trump’s biggest supporters but that doesn’t mean I agree with everything he says and does.

We’ve already seen what simple Wifi can do.

Imagine what is happening or will happen when Wifi meets 5G.

Some believe that advancing technologies are part of a conspiracy of depopulation.

Even if advancing technologies are not part of some grand conspiracy, they are hitting the market AND GOING INTO OUR HOMES without adequate testing.

That can not be argued.