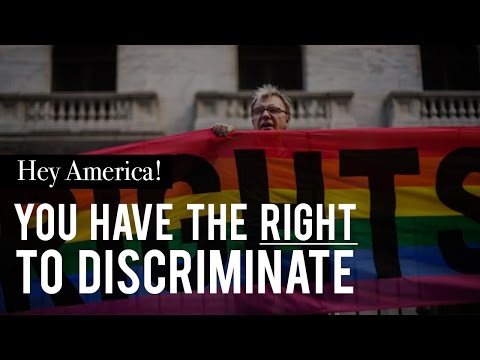 Should employers have the right to discriminate in hiring on the basis of obesity? The Washington State Supreme Court recently ruled that “it is illegal for employers in Washington to refuse to hire qualified potential employees because the employer perceives them to be obese.”

That follows guidelines released by the New York City Commission on Human Rights stating that discrimination against people based on their hairstyle will now be considered a form of racial discrimination; the refusal by the U.S. Supreme Court to hear an appeal from a lower court’s ruling that the owner of a bed and breakfast in Hawaii violated the state’s public-accommodation law, which bars discrimination on the basis of sexual orientation, when she refused to rent a room to a lesbian couple; and guidelines issued by the U.S. Department of Housing and Urban Development (HUD) making it tougher for homesellers and landlords to discriminate against applicants who have criminal records.

Here is what happened in the state of Washington:

The Washington Law Against Discrimination (WLAD), part of the Revised Code of Washington (RCW), the compilation of all laws now in force in Washington State, generally prohibits employers from discriminating against an employee because the employee has a disability. That echoes the federal Americans with Disabilities Act of 1990 (ADA), which “makes it illegal to discriminate against a qualified person with a disability.”

According to Taylor v. Burlington Northern Railroad Holdings , the case in question decided by the Washington State Supreme Court in 2007, Casey Taylor received a conditional offer of employment as an electronic technician for BNSF Railway Company (BNSF), contingent on the results of a physical exam and a medical history questionnaire. A medical exam found that Taylor’s height was 5 feet 6 inches and his weight was 256 pounds, resulting in a body mass index (BMI) of 41.3 — numbers different from those self-reported by Taylor. (According to the Centers for Disease Control and Prevention [ CDC ], a BMI of 40 or higher is categorized as “extreme” or “severe” obesity.) BNSF treats a BMI over 40 as a “trigger” for further screening in the employment process. BNSF told Taylor it was unable to determine whether he was medically qualified for the job “due to significant health and safety risks associated with ‘extreme obesity’ and ‘uncertain status of knees and back.’” BNSF offered to reconsider if Taylor would pay for medical testing, including a sleep study, blood work, and an exercise-tolerance test, but being unemployed at the time with no medical insurance, Taylor could not afford the testing. BNSF told Taylor that it was company policy not to hire anyone who had a BMI over 35 and that if he could not afford the testing his only option was to lose 10 percent of his weight and keep it off for six months.

Taylor then sued in King County Superior Court, alleging that BNSF violated the WLAD by refusing to hire him because of a perceived disability — obesity. BNSF removed the case to federal court and moved for summary judgment, relying on federal cases interpreting federal law to argue that obesity is not a disability under the WLAD unless it is caused by a separate, underlying physiological disorder. The U.S. District Court for the Western District of Washington dismissed the case, ruling that that “under the WLAD, a plaintiff alleging disability discrimination on the basis of obesity must show that his or her obesity is caused by a physiological condition or disorder or that the defendant perceived the plaintiff’s obesity as having such a cause.” Taylor appealed to the U.S. Court of Appeals for the Ninth Circuit, which ruled that whether obesity may constitute an impairment, and thus a disability, under the WLAD is an unresolved issue of state law and certified the question to the Washington State Supreme Court.

The Washington State Supreme Court, in a 7-2 vote, concluded,

We answer the certified question as follows — obesity always qualifies as an impairment under the plain language of ROW 49.60.040(7)(c)(i) because it is a “physiological disorder, or condition” that affects many of the listed body systems. Plaintiffs making a disparate treatment claim under the WLAD need not show that they actually had an impairment, e.g., that they actually were suffering from obesity. They need show only that their actual or potential employers perceived them to have a statutory impairment. RCW 49.60.040(7)(a)(iii). Because obesity qualifies as an impairment under the plain language of our statute, it is illegal for employers in Washington to refuse to hire qualified potential employees because the employer perceives them to be obese. See RCW 49.60.180.

The two dissenting justices agreed with the majority on most points, but concluded that “the majority’s answer to the certified questions, that obesity is always an impairment for purposes of the WLAD, ignores the need for an individualized inquiry.” Nowhere in their dissent is there any indication that the WLAD was bad law or that BNSF had the right to medically screen job applicants as they saw fit.

Whether obesity should be included as a disability, and therefore protected from discrimination, is similar to the debate over whether discrimination on the basis of sex includes sexual orientation and gender identity. Federal agencies and courts are currently split on the issue. The Equal Employment Opportunity Commission (EEOC) argues one way, and the Justice Department argues otherwise. The U.S. Courts of Appeals for the Seventh Circuit and the Second Circuit have ruled one way, and the U.S. Court of Appeals for the Eleventh Circuit has ruled to the contrary. The U.S. Supreme Court has agreed to hear three cases and settle the matter.

Since discrimination — against anyone, on any basis, and for any reason — is not aggression, force, coercion, threat, or violence, the government should never prohibit it, seek to prevent it, or punish anyone for doing it.

Originally published by the Future of Freedom Foundation.

Laurence M. Vance is an Associated Scholar of the Mises Institute, columnist and policy adviser for the Future of Freedom Foundation, and a columnist, blogger, and book reviewer at LewRockwell.com. He is also the author of Gun Control and the Second Amendment, The War on Drugs Is a War on Freedom, and War, Empire and the Military: Essays on the Follies of War and U.S. Foreign Policy. His newest books are Free Trade or Protectionism? and The Free Society. Visit his website: www.vancepublications.com.