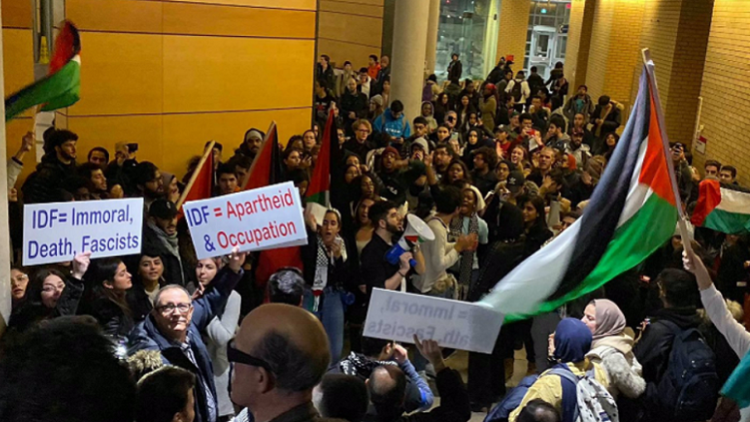 “Go back to the ovens, go back to Europe!”

That was what Jewish students, pro-Israel activists, and Jewish community members heard in Vari Hall.

It was a Wednesday evening at York University. Students and community members had come out to a modernistic building on York U’s Keele Campus in Toronto to hear the stories of former Israeli soldiers. The volunteers with Reservists on Duty, two women and five men, six Jews and one Arab Christian, were there to conduct a dialogue and answer questions about their experiences in Israel’s battle against terrorism.

Shar Leyb had grown up in Canada before making the decision to move to Israel and serve in the Israel Defense Forces. The ugly scenes that met him at York University was a Canada he did not recognize.

“It’s extremely sad,” he told Front Page Magazine. “In Canada, my home country, people filled with hate and violence were calling for the death of all Jews.”

York U’s Vari Hall had been the scene of some ugly confrontations in the past, but no one had expected 500 BDS and Antifa bigots to show up screaming hatred and attacking Jewish students on campus.

“Before the event, we were setting up and a deaf person could hear the chants,” Shar said. “We went to see and there were a couple of hundred people. Reservists on Duty is all about dialogue, talking to the other side, understanding their concerns and finding common ground. But they didn’t want to speak.

What happened can be seen in dozens of viral videos that quickly spread across the internet.

Amit Deri, the CEO of Reservists on Duty, had expressed concerns about the potential danger at York University even before the event. Posters depicting murderous Israeli soldiers had gone up calling for angry protests. “All out! No Israeli soldiers on our campus!” they had demanded. Another poster had urged protesters to wear black. That’s the color associated with antifa and violent anarchists.

While angry mobs chanted “From Toronto to Gaza, Globalize the Intifada!” and “Intifada, Intifada, go back to the ovens” in the hall outside, inside the room anti-Israel thugs tried to shout down the speakers. Students were pushed and shoved by BDS bigots waving PLO flags and chanting terrorist slogans determined to shut down the event and prevent the Israeli veterans from being heard.

But the volunteers with Reservists on Duty, Shillman fellows, had their own experiences in the Israeli Defense Forces, and had been through a one-year training program to prepare them for college campuses.

The mob outside might have intimidated some Jewish students, but the seven volunteers with Reservists on Duty remained calm and composed. One of the female veterans had been in a search and rescue unit. She said that the scene outside was nothing compared to what she had faced.

“We have been in dangerous situations, we are not afraid,” Shar Leyb told students in the audience. “You have to exercise your freedom of speech.”

At the center of the ugliness was the infamous Students Against Israeli Apartheid. SAIA had already been suspended once for its tactics. And little had changed as SAIA’s account retweeted a Quds News Network story crediting the hate group for having “bravely protested and managed to disrupt an event”.

Nazih Khatatba who had praised the murder of four rabbis in a synagogue as “courageous” was also there.

But pro-Israel activists believe that a sizable presence by antifa had made the situation truly explosive. The two sets of radical activists appeared to function as one movement in organizing the attacks and then developing a single narrative blaming Jewish students and activists for the violence at the event.

“This was the first time we saw a very effective collaboration between antifa and BDS pro-islamist activists,” Amit Deri told Front Page Magazine. “This event was proof that there is a deep connection between BDS and those who hate western civilization.”

Shar Leyb warned that the intensification of cooperation between these two violent groups could lead to people being seriously hurt. Antifa events have often led to major violence and serious injuries.

The events at York University were serious enough that they attracted condemnation from Premier Ford and Prime Minister Justin Trudeau.

“I am disappointed that York University allowed for a hate-filled protest to take place last night at Vari Hall. I stand with the Jewish students and the Jewish community,” Ontario Premier Doug Ford stated.

“On Wednesday night, violence & racist chants broke out against an event organized by the Jewish community at York University. What happened that night was shocking and absolutely unacceptable. Anti-Semitism has no place in Canada. We will always denounce it & all forms of hatred,” Prime Minister Justin Trudeau tweeted.

Despite these official condemnations, the only action taken in response were four trespassing tickets. That’s not going to deter violent mobs from targeting Jewish and pro-Israel events in the future.

And there has been no condemnation of Students Against Israeli Apartheid by name.

The real impact of these events will be felt among the students, not among the politicians.

While members of Reservists on Duty were disappointed by the lack of dialogue with anti-Israel protesters, they believe that the ugliness on display unmasked the hatred of the BDS movement.

“This was not a clash between equal groups, this was anti-Semitism,” Amit Deri told me. “This is a violent group that came not to protest, but to commit violence. It is very clear who the violent and dangerous people are.”

Reservists on Duty had not come to pick a fight. They had come to share their experiences on the front lines of fighting terror. They had not expected to come face to face with it at a Canadian university. But neither were they intimidated or deterred by the hate and the violence. Instead, they hope that they showed Jewish students how to stand tall and proud in the face of the ugliest displays of anti-Semitism.

At York University, Shar Leyb found a campus where Jewish students are afraid to publicly identify with their heritage and their faith. They hide the identifying symbols, like the Stars of David, that might give away who they are. “Jews are afraid to walk around on campus,” he told Front Page Magazine.

The veteran of a special forces unit in the Israeli military, who now works in the private sector, believes that the confrontation with the BDS mob showed Jewish students that it is possible to stay strong in the face of anti-Semitism. His advice to Jewish students is to, “join clubs, contact the administration, make sure things like this don’t happen on campus, make it a public fact, stand up, don’t be afraid to be Jewish, so history doesn’t repeat itself.”

A few years ago at Concordia University, a Jewish student was told to remove his kippah. An item of Jewish religious significance. In response, Jewish students were urged to be certain to wear them proudly. Just now, the University of Toronto’s Graduate Student Union, which supports BDS, had refused to support Kosher food on campus because that would be pro-Israel.

The veterans of Reservists on Duty came to York University to tell their stories and introduce students to the reality of Israel’s fight against terrorism, but they left having helped Jewish students find their voice.