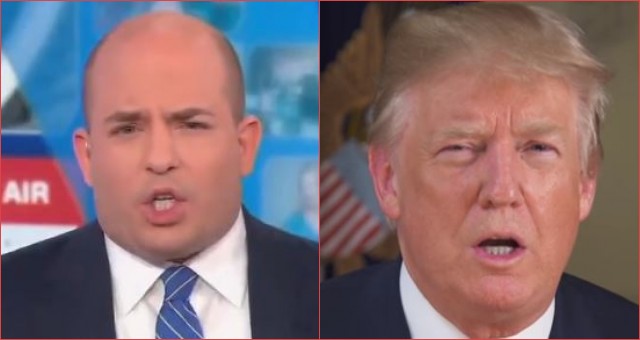 CNN’s Brian Stelter, host of the misnamed program “Reliable Sources,” had little journalistic credibility as it was, but he lost what remained Sunday night with what could go down as the dumbest cable news broadcast ever.

The Garbage Party’s media propagandists have long sought to characterize President Donald Trump as mentally unstable simply because he isn’t an orthodox politician — which is precisely why tens of millions of Americans voted for him.

But Stelter took this narrative way past a red line on his program with a “guest” who actually claimed that Trump is some sort of Svengali who has “mind control” over his growing legion of supporters.

What’s more, Stelter actually took this “mental health expert,” Steve Hassan, seriously, because, after all, he booked the guy.

This is @CNN, "the most trusted name in news." Media "journalist" @brianstelter ended his Sunday show "Reliable Sources" with a segment telling viewers Trump is a "destructive cult leader" a kin to Jim Jones and using "mind control" to manipulate his supporters. pic.twitter.com/j7XZnHTUdg

So, that’s the deranged Left’s new narrative for Trump’s GOP supporters: We’re not a political party anymore, we’re a …. cult.

The fact that it took this lunatic more than a few seconds to respond to Stelter’s question says all we need to know about his mental capacity.

But come on. Where do these people come from?

This is just so…over-the-top stupid. So much so that we lose IQ points watching people who want to be taken seriously even contemplate it.

Do you recall ever hearing ‘news’ analysts like Stelter claim that Barack Obama used “cultist mind control” on his supporters? Neither do we.

Oh, Trump has a mental effect on people, alright, but it’s not his supporters who are afflicted.

It’s his political opponents; they suffer from Trump Derangement Syndrome.

Stelter and Hassan should have discussed that. At least it’s real.