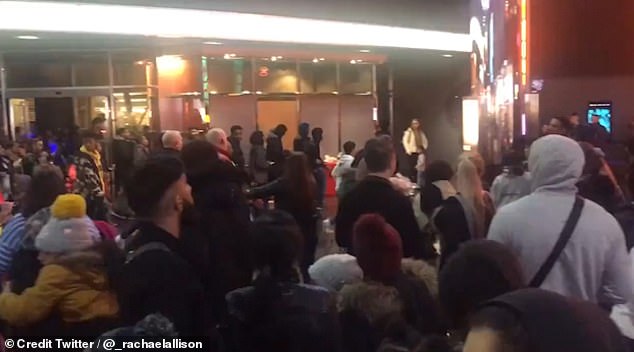 Thankfully there are no guns allowed in The UK, or one of these Muslim Gang Members may have been hurt.

We need to pay close attention to these stories coming from Europe because these are the results of open immigration policies.

A shocking photograph showing a young gang armed with a machete outside a cinema complex has been circulated on social media after a brawl broke out and police officers were attacked.

Pockets of fighting erupted in a 100-strong crowd at Star City cinema in Birmingham this afternoon after a ‘group of people arrived with machetes’.

Several arrests were made and police officers were assaulted as they descended on the scene armed with guard dogs at 5.30pm. It has also been alleged that they were carrying tasers.

Families and young children were at the cinema to see Frozen 2.

Pictures from the scene show police cars blocking access to the area as a policeman is seen standing with a guard dog.

Shocking footage shows young women appearing to push each other as officers try to get control of the situation.

Flashing blue lights are also seen as a group of at least eight officers stands on the pavement outside in front of a large crowd.

The cucked British media has reported the attackers as “youths” and “youngsters”.

Not one single British outlet mentioned they were all brown Pakistani Muslims.

Here, let us show you the proof: The Guardian said called them “warring gangs” and “youngsters”, the BBC called them just “people” like 100 people attacked bla bla bla, the Independent called “teenagers”, the Mirror was somewhat better, they called the attackers “youths and thugs”, the Daily Mail was even better, calling them “young gang” and they were the only ones who even showed a few photos of the attackers, even though they are all blurred, at least you can see their black hands.

CORRECTION UPDATE: We have finally obtained an uncensored photo of the attackers. Turns out they are all Pakistanis, but whatever, what difference does it make? Its not like Africans don’t do machete killings and “OHHHH NOOOO THEY COULDN’T HAVE POSSIBLY BE AFRICANS”. If that’s your mentality then you are brain dead.

We hear bits and pieces that are fit for media release and then there is a truth that is only told by the people.

Here are a few of the stories that made it through…

I have a Facebook friend that moved from The UK to France many years ago, thinking she was escaping this.

That was probably a mistake as the stories in The UK pale in comparison to what has gone down in France.

Trump must continue to stand against the wild immigration ideas of the left because there are many getting through already.

If Scalise is right, or even close to right, the real question is how many are making it through?