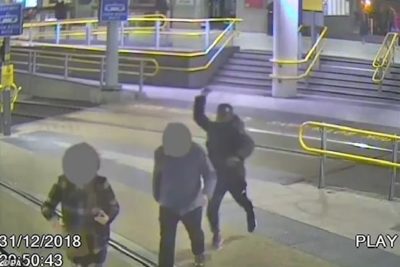 Jihadi Mahdi Mohamud, a Dutch national from a Somali family, who had arrived in the UK aged nine, pleaded guilty to three counts of attempted murder when he appeared at Manchester Crown Court today.

During his terror attack at the city’s Victoria railway station last New Year’s Eve, Mohamud expressed his allegiance to Allah by screaming ‘Allahu Akbar!’ and ‘Long live the Caliphate!’ as he stabbed his victim, James Knox repeatedly in the back, shoulders and head before turning his devotional attentions towards Anna Charlton, slashing her across the face.

Mohamud was pepper sprayed and Police Sergeant Lee Valentine, shot at him with his Taser, which failed to paralyse him.

Sgt.Valentine attempted to reload, but Mohamud stabbed him in the shoulder before being wrestled to the ground and arrested.
Hmm, will the Islamophobia never end?

Shocking CCTV footage shows the moment a terrorist launched a frenzied attack on train commuters – as the hero police officer who tried to stop the attacker recalls how he ‘lunged’ at his head with the blade.

Sergeant Lee Valentine, 31, has spoken of the moment he pulled the trigger on his Taser but failed to stop crazed lone wolf Mahdi Mohamud who was armed with a fillet knife.

He was with colleague Pc Tom Wright, 27, on duty at Manchester Victoria railway station when he heard a shocking scream as Mohamud launched the attack.

Sgt Valentine said he felt ‘massively’ lucky not to be more seriously injured in the attack last New Year’s Eve.

CCTV footage shows the moment the knifeman, 26, had walked up behind unsuspecting James Knox, screaming ‘Allahu Akbar!’ and ‘Long live the Caliphate!’ as he stabbed his victim repeatedly in the back, shoulders and head.

He then turned the knife on Mr Knox’s companion, Anna Charlton, slashing her across the face after the couple, in their 50s, randomly crossed his path heading for a tram platform shortly before 9pm last December 31.

Sgt Valentine said: ‘I didn’t even get the chance to take the fired cartridge off the top before he just started running towards me.

‘He probably closed a seven foot gap in half a second. ‘It was just like a dive, he flew, he probably jumped three or four foot off the ground and just sort of lunged, probably lunged at my head with his knife.’

Mohamud, who was born in the Netherlands and moved to the UK aged nine, had been diagnosed with a drug-induced psychosis in 2016, and had created a document incorporating the jihadi message of terror figurehead Anwar Al-Awalaki.

Mohamud at Manchester Crown Court today admitted three counts of attempted murder and one count of possession of a document or record likely to be useful to a person committing or preparing an act of terrorism, a manual titled, ‘the seven most lethal ways to strike with a knife’.

Talking of the moment he heard the attack, Sgt Valentine said: ‘It was just like a scream I had never heard before, it was literally like someone was being killed.’

Fellow British Transport Police (BTP) Pc Ashleigh Williams, 27, and her colleague Marsha Selby, 28, along with two tram staff confronted Mohamud, who ‘like an animal’ was ‘fixated’ on stabbing and slashing.

The suspect was pepper sprayed before seconds later Pc Wright, 27, arrived along with Sgt Valentine, the only one armed with a 50,000 volt Taser gun.