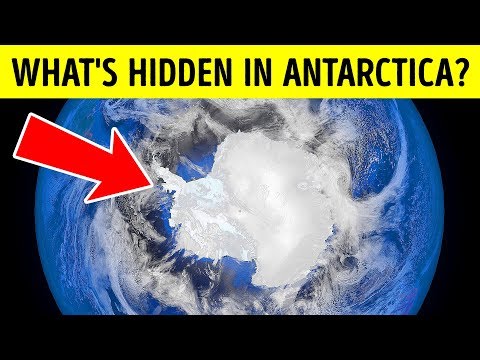 I’m still waiting for them to find a frozen group of climate change alarmists under the ice of Antarctica, but that discovery has yet to be made.

Until then, these are some of the strangest discoveries beneath the ice of the earth’s southern ice cap.

From the UK Express:

IT WAS a mind-blowing announcement – that not only had remains of historic inhabitants of Antarctica been found, but at the same time they could be from aliens.

The story went viral online, claiming that three ancient skulls were unearthed by a team of archaeologists.

It was seen as mind-blowing, not only because it was thought at the time Antarctica was first reached by humans, in 1820, hundreds of years after the suspected age of the skulls, but also because they were “elongated with giant craniums”, leading some commentators to claim they could have been the remains of aliens who visted Earth.

The reports claim that an archaeologist called Damian Waters and his team uncovered the skulls in a region of Antarctica called La Paille.

ALH 84001 is a meteorite, a rock that fell to Earth from space. It was found in December 1984 in Antarctica by a U.S. meteorite-hunting expedition. When it was found, ALH 84001 weighed about 4 and 3/4 pounds (1.93 kilograms). It was shaped like a rounded brick or a large potato, about 6 inches long by 4 inches by 3 inches, and was partly covered with black glass (like it was dipped in tar). The glass, called fusion crust, forms on all meteorites when they burn through the Earth’s atmosphere. ALH 84001 looked green inside, which really excited the expedition. But back at civilization, ALH 84001 looks much grayer inside than green.

ALH 84001 formed originally from molten lava, about 4.5 billion years ago, which is called its igneous age, possibly from an ancient martian volcano. To a geologist, ALH 84001 is an igneous rock, similar to many that crystallized from lava inside the Earth. ALH 84001 is also similar to an important group of igneous meteorites (the diogenites), and was classified as one of them until 1994 when its martian origin recognized by Mittlefehldt (1994).

Long after ALH 84001 crystallized from molten lava and cooled, about 4.0 billion years ago, it was heated again and deformed by a strong shock. This heating and shock were probably from the nearby impact of an asteroid or meteorite. Some time after this impact, possibly about 3.6 billion years ago, some kind of liquid flowed through ALH 84001 and deposited rounded globules of carbonate minerals. The possible martian fossils are in these carbonate globules. The only more recent event that we can see in ALH 84001 is another shock event. This shock may have come from the meteorite impact that lofted ALH 84001 off Mars. For a blow-by-blow description of ALH 84001’s geological history, see Treiman (1995).

7. Petrified remains of an unusual animal

Fossil-probing boffins say they have found evidence that early mammal-like creatures survived a severe episode of global warming 252 million years ago by moving to Antarctica. Most other species then living were wiped out.

Scientists are still debating what caused the end-Permian extinction, but it was likely associated with massive volcanic activity in Siberia that could have triggered global warming… A new fossil species suggests that some land animals may have survived by living in cooler climates in Antarctica.

The new species in question is Kombuisia antarctica, a curious critter classed among the anomodonts, “mammal relatives” which are now all extinct but which were the main plant-eaters in the era prior to the big die-off.

“Kombuisia antarctica, about the size of a small house cat, was considerably different from today’s mammals — it likely laid eggs, didn’t nurse its young and didn’t have fur, and it is uncertain whether it was warm blooded,” says Kenneth Angielczyk, assistant curator of paleomammology at the Field Museum.

The longstanding mystery surrounding Antarctica’s Blood Falls has finally been solved. The deep red falls were first discovered in Antarctica in 1911 where scientists noticed a river had stained the surrounding cliff of ice with a dark red color. Previously, they had believed it was due to algae discoloring the water, however that hypothesis was never verified.

Now, thanks to research by the University of Alaska Fairbanks, we know the true origin of the Blood Falls flowing from the Taylor Glacier. The deep red coloring is due to oxidized iron in brine saltwater, the same process that gives iron a dark red color when it rusts. When the iron bearing saltwater comes into contact with oxygen the iron oxidizes and takes on a red coloring, in effect dying the water to a deep red color.

The research team transected the glacier in a grid using radio-echo sounding (RES) to map out the features below the glacier. Thankfully, the super saturated brine that makes up the river allows for a stark density contrast in RES compared to the non-saline (fresh) ice. The research team calculates that the brine water takes approximately 1.5 million years to finally reach the Blood Falls as it makes its way through fissures and channels in the glacier.

In the farthest reaches of the world, where everything is white with blinding snow and ice, the clear McMurdo Dry Valleys are a striking anomaly. Ice and snow-free due to unique conditions, these valleys have intrigued researchers as the landscape on Earth that’s as close to Mars as we can currently get.

With 98% of its surface being covered in a mile-deep sheet of ice, Antarctica is the epitome of an unforgiving environment. Life is a rare occurrence in this severe climate, which is considered the driest, coldest, and windiest desert on planet Earth – but life has been found, in the most unlikely of places, and that unlikely place is the alien terrain of the McMurdo Dry Valleys.

According to ABC News…

Whisky bottles belonging to the antarctic explorer Ernest Shackleton, kept on ice for more than 100 years, have been found and retrieved from beneath the explorer’s abandoned hut.

The three cases of what is now aged scotch and two cases of brandy were left behind when Shackleton ran out of other supplies and gave up his attempt to reach the South Pole in 1909.

The bottles are now being examined by a team of scientists from New Zealand who were surprised to have found so much alcohol still in tact.

At a depth of 1100 feet an American archaelogists made a terrifying discovery. They came across a living creature that didn’t resemble any other living being. The length of the creature was about 8 feet. It had a retractable jaw and was covered with protruding bones. (Note: Video at the end of article gives more details. The sources I found online were all for 8 inch creatures. I did not find any documentation for the 8 foot creature in the below video.)

Expedition leader John Priscu, a professor of polar ecology at the University of Montana, told Live Science in a telephone interview from Antarctica this week that early studies of water samples taken from Lake Mercer — which is buried beneath a glacier — showed that they contained approximately 10,000 bacterial cells per milliliter.

That’s only about 1 percent of the 1 million microbial cells per milliliter typically found in the open ocean, but a very high level for a sunless body of water buried deep beneath an Antarctic glacier.

“By endurance, we conquer” was Sir Ernest Shackleton’s family motto. Shackleton was a famous explorer who braved polar ice and treacherous waters in three near-fatal Antarctic expeditions, and incredibly he endured through all of them.

But what does it take to find endurance? That depends on if you’re talking about the intangible trait or the ship that Shackleton and his crew took from South Georgia Island to Antarctica. The latter—the ship—ultimately broke up and sank.

1915 was the last time anyone saw Endurance. However, next January and February, scientists on a research trip to study the ice in the area where the ship sank are hoping to find it. Finding it will require new technology, century-old notes and a lot of luck.

Three other expeditions to find Endurance over the years have failed. But this attempt has some better odds, Julian Dowdeswell, director of the Scott Polar Research Institute, told Newsweek. Dowdeswell will be among the researchers on the upcoming voyage. Compared with past attempts to find Endurance, “I think we have the best possible chance,” he said.

This time, the crew will have more sophisticated technology, like GPS, drones to help them see possible routes in the ice and their autonomous underwater vehicle—an advanced and expensive machine called the S.A. Agulhas II, which can search under the ice and go relatively far from the research vessel to scour the ocean depths for Endurance. The crew plans to take a research vessel as close to where the ship sunk as they can, and then to launch the S.A. Agulhas II under the ice and scan the depths for the wreckage.

Sorry, it appears the no climate change alarmist ships have been found, YET.

I had my poles mixed up again.

We’ll be sure to let you know if those fools journey to the South Pole and hope for the best.

Here’s a video of the 10 Antarctic discoveries that were discussed in today’s article.