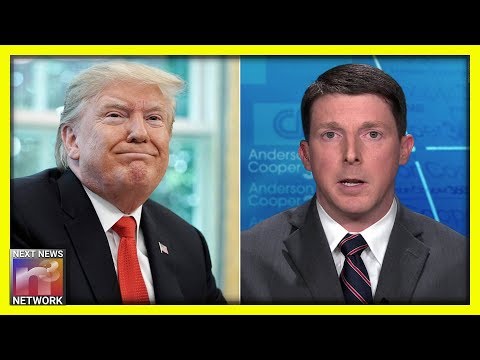 If a guy answers a direct yes or no question with ‘I have no comment at this time’ then you can be fairly sure of the answer.

People who are not the author of a book attacking Donald Trump, for instance, would simply say “no”, would they not?

It looks like yet another swamp creature has been exposed.

Well, well, well… Another swamp creature has identified himself and his name is Guy Snodgrass.

Here’s more from The Daiy Wire:

A new article from The New Republic suggests that former Pentagon aide Guy Snodgrass, who wrote speeches for Defense Secretary James Mattis, may have been the anonymous author of the infamous New York Times op-ed attacking President Donald Trump and the author of the new book “A Warning.”

Reading Snodgrass’s Pentagon memoir, Holding the Line, makes the clues to Anonymous’s identity apparent. As in A Warning, the sentences and paragraphs are pithy and punchy. Every chapter in both books begins with an inspiring but not cliché quotation from a historic figure. Many passages in the books are remarkably similar: the ordeal of conducting a Pentagon briefing for Trump; national security staffers exchanging appalled asides about Trump’s conduct of foreign policy via Twitter; and the arguments for why American alliances strengthen national security and why immigration policy shouldn’t be based on building a border wall. In particular, both books stress that, when briefed about international alliances, Trump derails discussions by griping about how allies are stiffing the U.S., from allegedly miserly NATO contributions to ostensibly one-sided trade policies.

Fox News’ Trace Gallagher pressed Snodgrass about the matter during an interview on the network, noting that Snodgrass tweeted out a link to The New Republic and wrote: “The swirl continues…”

“If you look at the article, the author, David Kusnet, pretty much hits all the high points, I mean he makes a very good case,” Gallagher said. “The question is, are you anonymous?”

“Great question, as you mentioned, I have a book out right now with my name on it called ‘Holding The Line,’ Snodgrass said. “I do appreciate that The New Republic said the writing was excellent across both books, but if I was going to make an announcement like that I would come into the studio with you in New York City.”

“So you are not denying that you are Anonymous,” Gallagher pressed.

“I just heard this reporting as I was coming over to the studio, I got invited on to talk about national security,” Snodgrass replied. “There is a lot to talk about there.”

“Why not just deny it outright? You said you just heard about it on your way to the studio but you sent out the tweet today not really denying it,” Gallagher continued.

“It’s the latest in a long series of D.C. parlor games, not unique to this point in time, it’s been going on for decades,” Snodgrass responded.

Geez I want to kick Mr. Snodgrass’ a$$ just for his cryptic answers to very direct questions.

People have had enough of the “D.C. parlor games.”

How would he have answered if we asked him if he flew with Jeffrey Epstein?

Would he have said, ‘I can’t answer that question while wearing my undershorts. I have to stand naked before you while fully saluting to answer your question, I’m here to talk about national security’?

Of course not. He would have responded with an unequivocal “no” but it probably would have taken him 25-50 words to say it.

Whether he wrote the book or simply transcribed it from a alternate personality that occasionally enters his mind, Snodgrass just admitted his swamp creature status and that he had something to do with the publication of that book.

I think he just earned his latest Deep State merit badge for taking the most words to say nothing at all.

America is so sick of these worthless political blowhards that can talk forever without saying anything at all.

He tends to say exactly what is on his mind, at the time, without fear of repercussions.