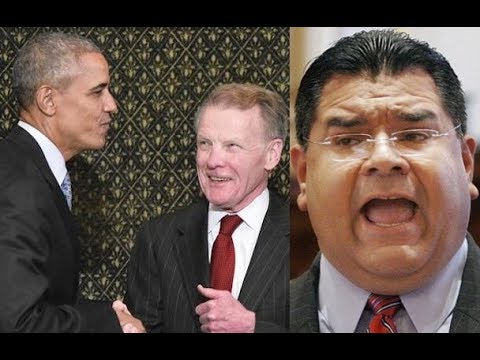 In late October we reported on the arrest of Illinois State Rep Luis Arroyo in the middle of a growing Democrat corruption investigation.

The plot continues to thicken.

Now State Senator Martin Sandoval has resigned his position as things heat up in a scandal that is overtaking Illinois Democrats.

From The Chicago Tribune:

State Sen. Martin Sandoval, the Southwest Side Democrat whose statehouse offices were raided by federal agents in September, is resigning his legislative seat effective with the new year, State Board of Elections officials said Wednesday.

Sandoval, in his 16th year as a state lawmaker, had previously resigned his chairmanship of the powerful Senate Transportation Committee. He has been a member of the leadership team of Senate President John Cullerton, who is retiring in January.

“It is with a heavy heart, I, Martin A. Sandoval, do hereby resign the office of state senator” effective Jan. 1 at 12:01 p.m., Sandoval, who has not responded to requests for comments since the raids, said in a letter to the office of the secretary of the Illinois Senate.

“Respect for my constituents and the Senate convinced me that this action is necessary in order to proceed without distraction to the important work that needs to be accomplished for working families throughout the state of Illinois in the future,” Sandoval wrote.

Federal agents raided Sandoval’s Springfield office on Sept. 24 with a search warrant seeking a vast array of information involving construction, transportation and power company officials, lobbyists, gambling interests, a red-light camera company and at least three suburban mayors. Agents also were at his Cicero office and his home. The Sandoval raid was quickly followed by federal law enforcement actions in McCook, Lyons and Summit — all towns in the senator’s district.

The Tribune previously reported that agents visited Bluff City Materials, a Bartlett sand and gravel operation owned by a major Sandoval donor, and that his connections to Commonwealth Edison — where his daughter, Angie, has worked as a senior account representative — have also been probed.

This scandal is growing and more Illinois Democrats are likely to be arrested and/or forced into resignation.

Here is part of our report on Luis Arroyo from October 30:

CBS Chicago is reporting that Illinois State Rep. Luis Arroyo has been arrested for bribery:

CHICAGO (CBS) — Another powerful Springfield Democrat has been targeted by the feds – this time, agents arrested Rep. Luis Arroyo (D-Chicago) on accusations of bribing a state senator.

There was just one problem – that state senator was working as an informant.

Arroyo, 65, is charged with one count of federal program bribery, according to a criminal complaint and affidavit filed in U.S. District Court in Chicago. Arroyo made an initial court appearance before U.S. Magistrate Judge Maria Valdez and was ordered released on a personal recognizance bond.

The state senator he bribed was working as an informant?

Looks like someone saved their own assets early in this investigation.

There are some big names that could potentially be drawn into this scandal like Barack Obama and Rahm Emanuel, but we all know that it is unlikely to make it that far.

Still, we can hope and dream.

For now, some Illinois Democrats are scrambling for the exits while others have been forced to the exits.