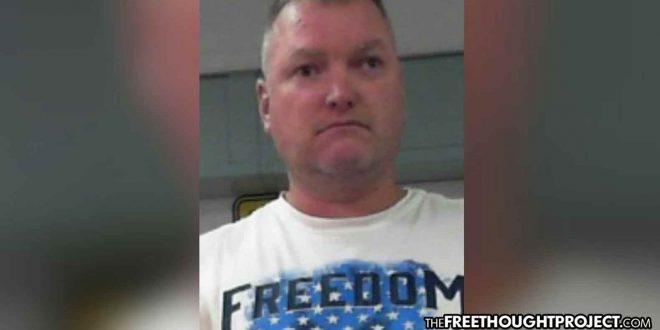 A West Virginia Corrections Officer apparently wanted to be a part of the prison population he served so badly he allegedly raped a young girl from the time she was 9 until she turned 13. He’s now facing hundreds of charges over the incident.

For his crimes, James Cain, 48 of Salem, WV was charged with over 600 counts of child sex charges. Cain already admitted to sexually assaulting the young victim. Evidence has also been collected from the home where the sexual assaults took place which included photos of the girl’s naked body.

Unfortunately, the girl is apparently a member of Cain’s own family. According to News 13 WOWK:

Cain is charged with 104 counts of first degree sexual assault; 208 counts of sexual abuse by a parent, guardian, custodian or person in a position of trust to a child; 104 counts of third-degree sexual assault; 208 counts of incest; and charges of use of minors in filming sexually explicit conduct and sending, distributing, exhibiting, possessing, displaying or transporting material by a parent, guardian or custodian depicting a child engaged in sexually explicit conduct.

Cain is no stranger to law enforcement having served for over 15 years as a high ranking corrections officer as a lieutenant in the Salem Correctional Facility. He is being held at the North Central Regional Jail and his bail has been set at $600,000.

Unfortunately, judges and prosecutors often consider an officer’s contribution to society when determining a sentence for officers such as Cain. Equally disturbing are sexual assaults by officers who later, following sex crimes charges, spend zero days in jail.

Over a four and a half year period of time in Arizona, 13 prison guards were arrested and charged with sex crimes against inmates. None of them spent a day in jail. The office of then district attorney and now AZ Supreme Court Justice Bill Montgomery handled 11 of the 13 cases. In each one of the cases guards were given plea deals some might say amounted to special treatment, dropping most of the serious charges against the jailers.

Now, several victims of the corrections officers are now attempting to sue the state. AZ Central described how the officers received a slap on the wrist for their crimes.

Prosecutors in all 13 cases dropped one or more of the serious felony charges — which in nearly all cases could have resulted in more than two years of prison per charge — in exchange for a guilty plea to either a misdemeanor or the lowest-level felony (class 6). Those who pleaded to a class 6 felony had the charge “undesignated,” meaning that after sentencing and probation, a judge could change the felony record to a misdemeanor.

It’s not just in Arizona either.

Indeed, one need only browse through our archives to see the brutal reality that is police sexual misconduct. Arguably, the reason it is so pervasive is the fact that they can get away with it with little to no consequences.

Unfortunately, while the actual laws written in the United States against rape appear harsh, at first glance, in reality the cops, the prosecutors, the judges, and eventually juries go soft on pedophiles, especially pedophiles who wear a badge.