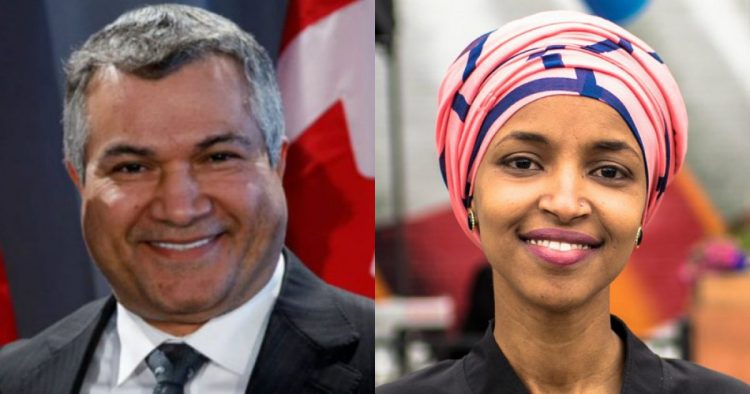 We reported earlier this week on the deposition put forth by Kuwati-born Canadian businessman Alan Bender, who was giving evidence in the trial of Sheikh Khalid bin Hamad al-Thani.  In that deposition, not only did he indicate that jihad Rep. Ilhan Omar (D-MN) is a treasonous, paid Qatari agent, but that she can be easily bribed with sex and money, so much so that he said she was a “sex mania” and “very weak when it comes to money and sex.”

One must keep in mind the deviant sexual behavior of Omar.  She was married to two men at the same time, one being her brother.

Who knows truly who the father of her children is.

Furthermore, she’s been caught in adultery with a married man while married to another man.

So, none of this is surprising.

Bender’s affidavit was contained in a 233-page submission to the court.

Beginning on page 76 of the document above,  Bender was asked, “So she [Omar] was recruited by the Government of Qatar before she was a member of the United States Government?”

“That’s what they told me,” Bender replied.

“And they saw her as a vulnerability, somebody that they — who had vulnerabilities, rather, and they agreed to fund her?” Bender was asked in a follow up question.

Bender was also asked if they funded her in numerous ways and he said that they did.

When asked if she was married at the time, Bender said, “I didn’t ask that but they mentioned to me that — I said:  Why would a woman in hijab — because I was under the impression that she’s a devout Muslim.”

“A woman in hijab takes bribes?” Bender continued.  “They said:  don’t be fooled by her head scarf.  She’s a sex maniac, and she is very weak when it comes to money and sex.  And we got both.”

Those were the two means that Qatar used to exploit and manipulate Omar.

Again, I ask, where is a serious investigation into this and possible indictment and arrest of this traitor?

She is a sitting member of the United States House of Representatives Foreign Affairs Committee.  At the least, she should be removed from that position till there is a complete investigation of these claims.

She’s already given us multiple examples of her lawlessness, including that of money and sex.

Here’s a few of Omar’s greatest hits demonstrating this.

She’s a lawless, corrupt woman, and so are other members of her family.

Accepting bribes is considered a crime under our Constitution for those in the executive branch and is listed in the impeachment clause (Article II, Section 4, US Constitution).

However, it is also grounds for removal from Congress.  This is called “expulsion.”

Article I, Section 5 of the United States Constitution provides that “Each House [of Congress] may determine the Rules of its proceedings, punish its members for disorderly behavior, and, with the concurrence of two-thirds, expel a member.”

According to House.gov, the following members were expelled from the House of Representatives.

Notice the final two there were convicted of bribery. I say we need to get things moving along as Omar is a traitor in our Congress. We just need to see her convicted of her many crimes and then dealt a swift and just punishment, which has been death in our history.