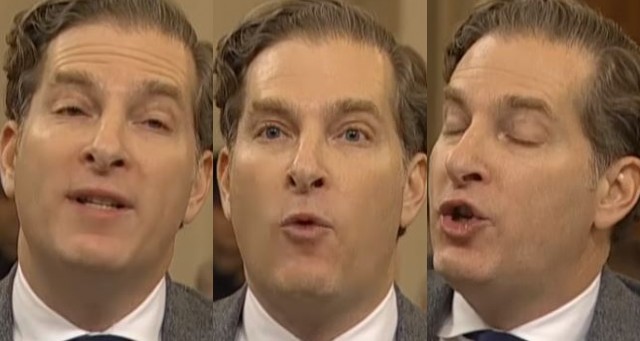 (TNS) Harvard Prof. Noah Feldman embodies what is wrong not only with American higher education but with our system in general.

Like the Democrats he supports, he is a cancer on our body politic. He’s the worst kind of hack: He uses his position as an Ivy League ‘law professor’ to mask his blatant Left-wing partisanship. And just remember, this guy is teaching some of our next-gen political leaders — not in how the Constitution and rule of law work, but how to be a good practitioner of Marx and Lenin to suborn our republican form of government.

As we noted Tuesday, there’s a reason why another hack, House Judiciary Committee chairman Jerrold Nadler, named Feldman as one of the first ‘impeachment inquiry’ witnesses before his panel.

Feldman, like most other Democrats, has been calling for President Trump to be impeached practically since he was inaugurated.

Feldman tweeted in March 2017 — less that two months into Trump’s term — that he should be “impeached” for accusing Barack Obama of “wiretapping” his campaign.

We know that ‘wiretap’ thing absolutely did happen.

In September 2017, Feldman called for the president to be impeached in a piece for the New York Review. Then, he based his position on “collusion” between the 2016 Trump campaign and Russia which, of course, was always a deep state hoax.

And anyway, even Robert Mueller concluded that didn’t happen.

“As more and more evidence of collusion between Donald Trump’s presidential campaign and Russia has come to light, the analogy to Watergate has grown ever stronger,” Feldman wrote.

“Whether or not it is ‘worse than Watergate,’ the Trump-Russia scandal differs from it in ways that bear directly on how impeachment might serve as a remedy today,” he added.

So Feldman is a Nadler witness, which tells us all we need to know about the lack of seriousness on Nadler’s part, let alone ‘impeachment’ in general.

But even more than that, Feldman himself destroys his own credibility — at least among Americans not afflicted by Trump Derangement Syndrome.

During Wednesday testimony, this fool actually said that we must impeach President Trump lest we lapse into a “monarchy,” we suppose like the one we rebelled against a couple hundred years ago.

Constitutional scholar Noah Feldman: "If we cannot impeach a president who abuses his office for personal advantage, we no longer live in a democracy—we live in a monarchy, or we live under a dictatorship." https://t.co/T7ONhXv599 #ImpeachmentHearings pic.twitter.com/bu9dGqsuvp

ABC News ought to be reprimanded just for tweeting this stupidity.

Recall Trump can’t even issue an executive order without it being challenged and summarily overturned by real tyrants educated by hacks like Feldman and put on the federal bench by Obama.

He can’t overturn DACA though it was created by Obama via executive fiat.

He can’t get any border wall built because Democrats (and too many RINOs) won’t fund it through Congress.

Trump renegotiated the job-killing NAFTA trade deal, but USMCA is now languishing in a Democrat-run House because though the new agreement will help American workers and our country, they refuse to give Trump a ‘win.’

How, exactly then, is the president’s foreign policy leading us down the road to authoritarianism? Maybe Trump should have spied on journalists or something like that.

Oh wait…that was Obama, too.

The Left has been attempting to convince Americans that Trump is a tyrant for the past three years, but not a single right has been taken away from anyone nor a constitutional amendment destroyed.

In fact, if there is any destruction of the Constitution it’s been done by the Garbage Party and their hack sycophants like Feldman.

It’s the Democrat Party that threatens to destroy the republic as evidenced by their effort to destroy a duly elected president they simply don’t like.

Democrats are calling as witnesses the kind of people who would name the minor child of the President as a punchline in a committee hearing. pic.twitter.com/lyqRxVXKsD

One thing is clear → House Democrats don’t have the evidence or the facts to move forward with their impeachment sham.

The case is CLOSED. It’s past time to move on and get back to solving real problems for the American people. pic.twitter.com/PnfHuE8NdU