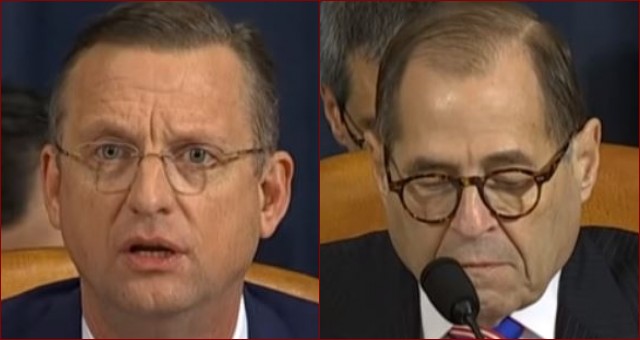 “America will see why most people don’t go to law school. No offense to our professors. But please, really?” the Georgia Republican said during his opening statement.

“We’re bringing you in here today to testify on stuff most of you’ve written about, all four. With the opinions we already know out of the classrooms that maybe you are getting ready for finals in, to discuss things that you probably haven’t had a chance — unless you are good on TV or watching the hearings the last couple of weeks you couldn’t possibly have digested the [House Intelligence Committee Chairman) Adam Schiff report from yesterday or the Republican response in any real way,” Collins added.

“The American people is really going to look at this and say huh? What are we doing? There is no fact witnesses planned for this committee. That’s an interesting thing,” he continued.

“Frankly, no plan at all except next week a hearing on the presentation from the other committee that sent us the report and Judiciary Committee, which I’m not sure what they want us to present on. And nothing else. No plan,” Collins continued.

“Why did everything that I say up to this point about no fact witnesses — nothing — for the Judiciary Committee, which spent two and half weeks before this hearing was held under Clinton,” he continued, a reference to House impeachment proceedings against former President Bill Clinton for obstructing justice and witness tampering.

“Two and half weeks we didn’t find your names out until less than 48 hours ago. I don’t know what we’re playing hide the ball on,” Collins added.

Collins knows what’s going on here, even if most Democrat voters don’t: This is a sham, and it’s an obvious one.