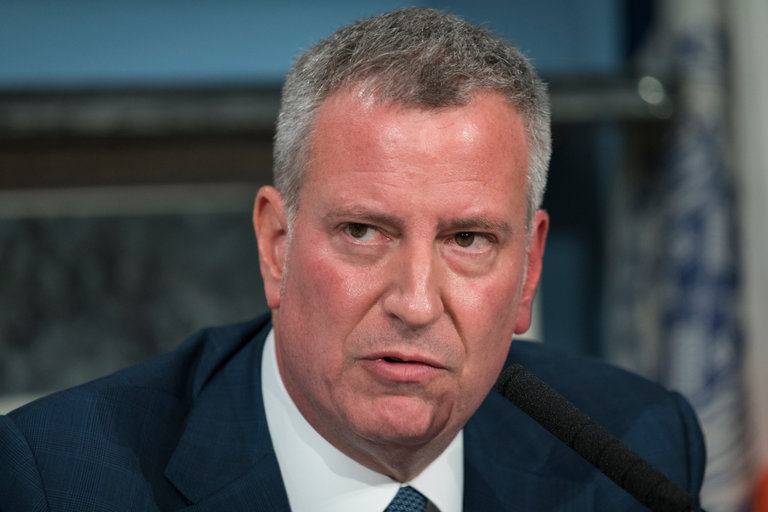 FULL DISCLOSURE: The very fact that New York City is this writer’s birthplace and hometown – having been a familial and professional stomping ground for many years – it will always hold a special place in this heart. And this is precisely why its purposeful destruction strikes this and that nerve – most of which land at the doorstep of Bill de Blasio, the city’s Commie/Marxist/socialist (six of one, half a dozen of another) Mayor.

THAT being established, those of us who keep track of Demster-controlled cities can’t help but feel enraged. Tragically, they are overrun with rat-infested buildings and homeless encampments, areas that are not habitable for pigs. No kidding. As a result, they are plagued with diseased hypodermics and a host of heretofore eradicated epidemics; cities which are more akin to third world-like controlled nations. Namely, but not exclusively, atop the list they include: Baltimore, DC, LA, San Fran, Austin, and Chicago, but with an increasing host of others making the “grade.” Yes, Comrade De Blasio is hell-bent on adding NYC to the aforementioned trash heap.

BUT for the doubting Thomas types, feel free to view the following proofs of the same, that is, if you dare.

STILL yet, once recovered from said vomit-inducing truths – and prior to exposing De Blasio’s latest dereliction of duty, criminality, if you will – the following is more than indicting:

NY Post  Sarsour, a radical Muslim activist useful idiot for Mayor Bill de Blasio, blasted into the mainstream in August with a fawning profile published in The New York Times headlined: “Linda Sarsour is a Brooklyn Homegirl in a Hijab.”

WITH the above seared into your consciousness (dear reader, so sorry for, once again, being the bearer of such horrific news), it is imperative to internalize that Comrade Bill de Blasio is preparing for the coup de grace!

ALAS, this go-around it is through a so-called “legal” (never mind, it is illegal AND immoral) maneuver, which, in reality, is a bludgeon via a “criminal release” program. Incontestably, he expects to permanently bring down the wrecking ball of all wrecking balls onto the once glorious cultural and financial epicenter of America, that is, New York City! Yes, once NYC goes, so too the rest of NYS. Guaranteed, many cities will fall like dominoes – even those under Repub leadership, too.

New York state is preparing to release 125,000 criminals in 2020 and will be providing them with taxpayer-funded housing, job training, and more.

The criminal release program is part of a new program created by Bill de Blasio which eliminates bail for a number of crimes, including felonies.

Of those 125,000 released accused criminals, New York City will provide taxpayer-funded subsidized housing, job training, and family counseling to 10,000 each year. The scheme, called the “Atlas” program, will cost New York City taxpayers tens of millions of dollars each year.

All a program like this is going to do is incentivize criminals to keep on doing what they’re doing. They are effectively rewarding wickedness, and when you do that, why would they be inclined to change their ways? This is a very counter-productive attempt at criminal reform if you ask me.

Mayor Bill de Blasio came to the defense of a city program that critics say will reward criminal behavior.

The incentive program would give accused criminals – being released from jail under the city’s new cashless bail policy – things like New York Mets tickets and gift cards for showing up to court.

GOT that? So, who said it doesn’t pay to be a criminal??

KNOW this: De Blasio, a life-long Marxist bastard (currently, a fully open Commie), won’t cease and desist, unless the good citizens of NYC descend en mass upon City Hall and do whatever it takes to bring about a volte-face. No time to lose!

On Jan. 10, 2019, New York City Mayor Bill de Blasio went “full-on communist” in his State of the City speech at Kings Theater on Flatbush Avenue in Brooklyn. There is no other way to describe the hour-long, anti-free market, forced wealth redistributionist, power-grabbing diatribe.

The content of de Blasio’s speech shouldn’t really be a surprise. De Blasio is a long-time Marxist, or as he was euphemistically referred to in The New York Times, “a young leftist.”…..continue his treachery here……

EVEN more so, according to the highly regarded NOLO legal publisher, as well as legal precedent, let there be no doubt: regardless of the pretzel-like gymnastics performed by his far-left legal foot soldiers, allowing criminals – most inherently, those charged with felonies – loose on an unsuspecting community (sans bail, no less) is against standard LEGAL practice and a civilized society, alike.

As a general rule, bail for offenses classified as felonies is five to ten times the bail required for misdemeanors. The more serious and dangerous the crime, the higher the amount of bail is likely to be. As a general rule, a jailhouse bail schedule is inflexible. The police will not accept bail other than as set forth in a schedule; suspects wanting to pay less must go before a judge.

MOST significantly, and above all else, the above putsch against civilized norms is designed with a larger goal in sight: the utter destruction and collapse of the liberal democratic society through total mayhem and chaos – that which Commie reds and Islamic greens, yes, the global red-green axis, view as their “rallying cry” and the justification for their (temporary) locking of arms. Forces.

TO wit, by systematically smashing the moral, cultural, legal, and social fiber of the existing democratic system, their “transformation” of America will, eventually and inevitably, emerge from its ashes.

IPSO facto, millions of patriots should view Comrade De Blasio’s “criminal reform” for what it truly is: the coup de grace of his two-term destructive swath through New York City in specific and the entire state in toto – with intended and expected reverberations throughout the nation!