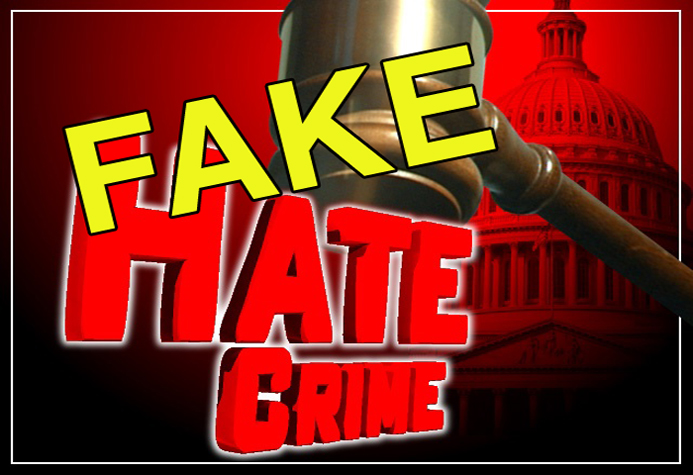 You’ll never guess the “unlikely” suspect who confessed to being behind anti-gay, pro-Trump, Nazi graffiti spray-painted on a far-left church in Indiana in the wake of Trump’s election!

"Heil Trump" and an anti-gay slur were scrawled on an Indiana church after the 2016 election.

The investigation uncovered an unlikely suspect — and a hoax. https://t.co/FYgzbBFu90

The investigation actually uncovered the most likely suspect…

But to Brian Shrader, the first officer on the scene that morning, the circumstances of the crime didn’t seem so clear-cut.

St. David’s was a beacon of support for gay rights. But that was all but unnoticed outside the church’s several dozen parishioners. https://t.co/3bLFewyqGK pic.twitter.com/CNhsCCjwk0

Nathan Stang, who was a member of the church, confessed to being behind the graffiti while being secretly filmed.

Could the hateful graffiti have been written by somebody who planned to sit in the pews Sunday morning?

Pushing Nathan Stang to confess — and recording it on the camera disguised as a fob on his keychain — was Shrader's last chance at solving his case. https://t.co/SLF0pLFNe7 pic.twitter.com/BoARkztzvu

Of course, the Washington Post said the real victims are not the white folks falsely blamed for this hate hoax and many others but the “victims of real hate crimes” who Stang damaged by “handing a talking point to those seeking to delegitimize them.”

Although Stang avoided 30 days in jail, he would spend many months trying to atone for what he had done.

Having experienced forgiveness he did not expect and is still not sure he merits, Stang said he now tries to forgive others. https://t.co/ehovI2VCnS

The church’s SJW reverend said she was “excited” by the graffiti and decided to leave it up to make an “event” out of taking it down with members of the community.

CNN painted the case as part of the supposed epidemic of “hate crimes” after Trump’s election (which is a hoax in itself).

The only epidemic we’ve seen since Trump’s election is the epidemic of staged hate hoaxes which are ultimately a form of blood libel to smear all white people.

The 135 Republicans Who Voted To Confiscate Guns From Our Veterans In Latest NDAA Bill
September 25th, 2021 Sons of Liberty Media