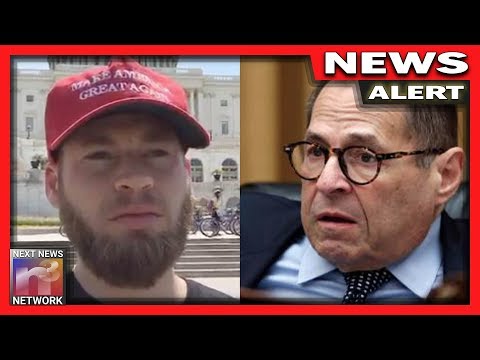 On Monday the Impeachment hearings FINALLY produced something worth watching, but most Americans, who have tuned out, probably missed it.

Troyer had a point and was speaking for the majority of Americans.

The Democrat impeachment coup got off to a rocky start on Monday.

Right off the bat Jerry Nadler’s hearing was interrupted by a pro-Trump protester!

It was the heroic J. Owen Shroyer who started screaming at Nadler!

Owen Shroyer: “You are committing treason. We voted for Donald Trump. Americans are sick of your impeachment scam.”

UPDATE– Owen Shroyer was arrested for interrupting the coup.

Twitter has apparently blocked/scrubbed the video it, so we are lucky that Next News Network uploaded it and reported on it to preserve it for us.

The only thing that would have made this better is if Troyer somehow got into a physical fight with Jerry Nadler.

Troyer is good but he’s no Alex Jones. 😉

Thank You J. Owen Troyer for giving us a real news story to report in the midst of these bogus impeachment hearings.