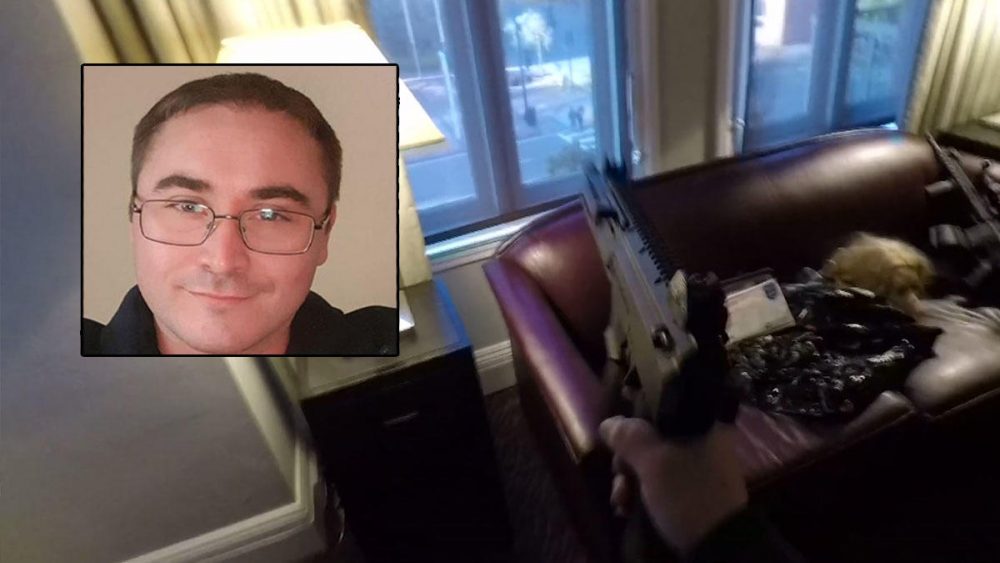 A San Diego County man is in police custody after posting graphic videos on YouTube where he appeared to be practicing a mass shooting, police said.

Steven Homoki, 30, was arrested on Thursday on suspicion of possession of an assault weapon, possession of a high capacity magazine and child endangerment, San Diego police said in a statement Friday.

Authorities received a tip about Homoki, of Spring Valley, California, on Monday, concerning videos he posted online. The tipster reportedly said Homoki had “gone off the deep end” and said he had a “plan” in place, according to NBC San Diego.

In the videos, Homoki is seen in a San Diego hotel room with several guns, magazines and bullets. The video appears to shows Homoki loading the guns, crawling on a bullet-strewn floor, loading guns and pointing the weapons at pedestrians out the window.

At one point in the video, Homoki pulls the trigger on an unloaded rifle pointed at pedestrians and says, “One down, more to go.”

San Diego’s Joint Terrorism Task Force began investigating the video after the tip, which it tied to Homoki. Authorities said they obtained a search warrant for his home, where he was arrested l on Dec 5, hours after San Diego Police Department investigators seized 14 registered firearms, including two assault-style rifles, from his Spring Valley home.

“This investigation exemplifies how the San Diego Joint Terrorism Task Force works every day to address violent threats to the people and institutions of San Diego,” San Diego FBI Special-Agent-In-Charge Scott Brunner said in a statement. “The extraordinarily swift investigative efforts put forth by the dedicated Agents and Officers of the San Diego JTTF quickly identified, located and arrested Mr. Homoki, preventing further incident. This exemplary result embodies the very essence of what the Joint Terrorism Task Force can achieve. Just three days ago Mr. Homoki was an unknown poster of disturbing videos and is now behind bars, his threats neutralized. This investigation is a truly extraordinary accomplishment. “

San Diego police did not provide more details on the child endangerment charge of which Homoki is also accused.