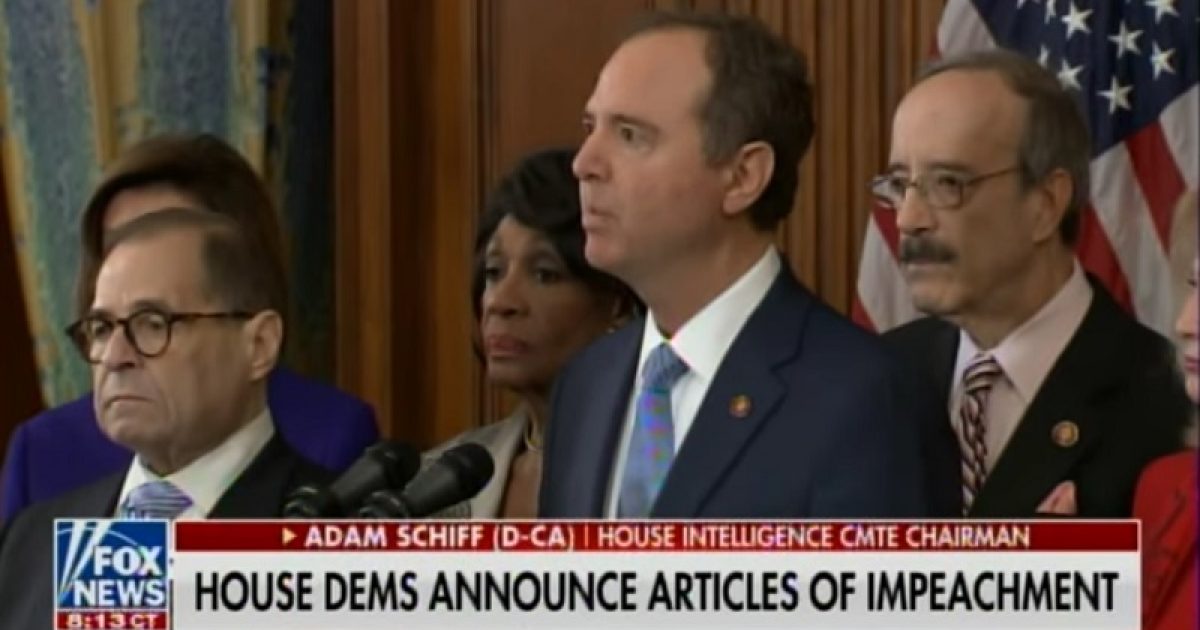 On Tuesday, Democrats announced they were filing two articles of impeachment against President Trump, one for abuse of power and another for obstruction of Congress based on second-hand allegations from a whistle-blower whose name no one in America is apparently allowed to utter or write.

During the announcement, Adam Schiff, the California Democrat coup leader who currently runs the Intelligence Committee, admitted the 2020 election is the reason for the articles of impeachment.  And of course, he lied during his statement.

“The remedy is impeachment. It is an extraordinary remedy and one that I’ve been reluctant to recommend. President Trump solicited a foreign nation Ukraine to publicly announce investigations into his opponent. A baseless conspiracy theory promoted by Russia to help his reelection campaign… When the president got caught he committed his second offense,” he said, pushing the now debunked Russia collusion conspiracy.

Oddly enough, there was no mention of bribery, something Democrats had earlier pushed after conducting a focus group.

Democrats refused to take questions after making their announcement.

Nadler just said that I “pressured Ukraine to interfere in our 2020 Election.” Ridiculous, and he knows that is not true. Both the President & Foreign Minister of Ukraine said, many times, that there “WAS NO PRESSURE.” Nadler and the Dems know this, but refuse to acknowledge!

Nadler just said that I “pressured Ukraine to interfere in our 2020 Election.” Ridiculous, and he knows that is not true. Both the President & Foreign Minister of Ukraine said, many times, that there “WAS NO PRESSURE.” Nadler and the Dems know this, but refuse to acknowledge!

Of course they refuse to acknowledge because they have declared war on the American people, the Constitution, the rule of law, the rules of the House and reality itself.  Using Hillary Clinton’s own definition, they have become a direct threat to the United States.