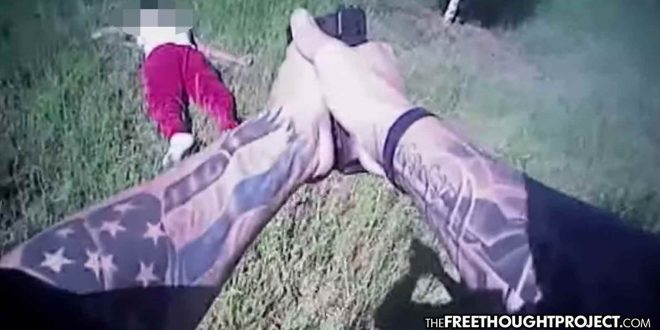 Ceres, CA — Heart wrenching body camera footage was just released this week showing a Ceres police officer opening fire on a 15-year-old boy as he ran away. The officer dumped his entire magazine while aiming at the boy’s back, killing him for fleeing.

Carmen “Spencer” Mendez was shot and killed in August 2018, however police have only just released the body camera footage publicly. The incident began during a car chase in a vehicle in which Mendez was a passenger. The chase ended with Mendez jumping out of the vehicle and fleeing on foot. Although the police were pursuing the vehicle over an alleged brandishing of a handgun, they were looking for a young man wearing a black shirt and jeans, according to records from Ceres. Mendez was wearing a white top and red pants.

As the graphic video shows, Ceres police officer Ross Bays drives up behind the Lexus, gets out of his vehicle and opens fire on Mendez as the boy ran into an almond orchard. The officer gave no commands to the boy to even stop before he opens fire, killing him.

Only after he dumped his entire magazine at the boy did the K-9 officer give any command. “Get on the ground,” he yelled at the teen who had collapsed in the orchard next to an almond sapling.

Police would later claim that Mendez was armed with a gun. However, we can clearly see in the video that he was not pointing anything at the cop and although a gun was found at the scene, it was over five feet from the boy’s body.

Despite a year passing since the shooting, and the horrifying video, the Stanislaus County district attorney’s office is still investigating and has not decided whether to file criminal charges against Bays. The civil process moved far more swifter and the family received a $2.1 million settlement earlier this year.

According to the Modesto Bee:

Police Chief Richard Collins said in a Tuesday interview that he would not speak about the shooting until the Stanislaus County District Attorney’s office had concluded its review of the shooting.

The chief went on to give the canned statement of how officers are often forced to make split-second decisions in which they cannot hesitate before dumping their entire magazine into the backs of fleeing teenage boys.

“I will just say this (as a general statement),” Collins said. “We have to make split-second decisions based on situations, which are right then and there. It’s easy for anybody to come in and say, ‘I would do that, or this, or that looks horrible.’ But we were not in the officer’s shoes when it took place.”

Modesto attorney Adam Stewart and Sacramento attorney Mark Merin, both represented the family in their civil suit. Even if the boy was holding a gun, they say Bays had many other non-lethal options at his disposal which were not used, up to and including telling the boy to surrender or stop. Bays could’ve also released his K-9, set up a perimeter, or any other number of less lethal tactics.

“He was running away,” Stewart has said of Mendez, “fleeing the scene. At no time did he approach the officer.”

As to why Bays shot first and gave commands second, his past could shed some light. Mendez was the second person killed by Bays in just a 10-month time frame. Bays shot and killed another man in the line of duty 10 months before killing Mendez, according to Merin. Merin said the city of Ceres reached a similar $2 million settlement with Nicholas Pimentel’s family after police killed him. The shooting death of Pimentel was ruled justified, which allowed Bays to go back onto the street to strike again.

“What I get out of this is these officers are not trained, not disciplined, not corrected,” said Merin. “They’re not terminated after being involved in these kinds of killings. It shows a total lack of leadership, but it also shows a lack of reverence for human life.”

We agree, this has to stop.