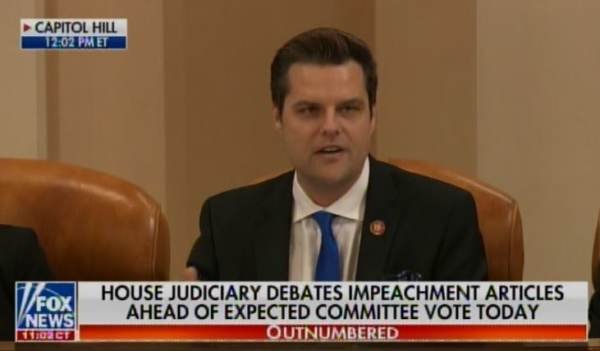 I think impeachment hearing ratings may be on the way up.

Who got to Matt Gaetz?

Who is paying this guy?

Here’s a refresher on what Matt Gaetz was speaking of:

Breitbart’s Matthew Boyle broke news on Friday that Hunter Biden & Friends had a wild ride with a rental car return in 2016.

Drug paraphernalia was found. The keys were returned inside the gas cap and lots of party supplies were uncovered inside the vehicle.

Hunter Biden was nowhere to be found and this reminds me of a plot from The Hangover movies.

This is not Hunter’s first rodeo. Alana Goodman of The Washington Examiner reported just last month on some of Hunter’s previous problems:

Biden’s son Hunter, now 49, joined the Navy Reserves in 2012 after receiving two special waivers, one because he was three years over the age limit of 40 and another for a “drug-related incident when he was a young man.” A month into his service, he tested positive for cocaine during a random drug test and was discharged.

Hunter likes to party. Check out what his ex-wife said about him in regard to their divorce.

In 2017 divorce papers, Hunter Biden’s then-wife Kathleen stated he spent “extravagantly on his own interests (including drugs, alcohol, prostitutes, strip clubs, and gifts for women with whom he has sexual relations).” Source

In 2016 there was a wild weekend that was buried up until Friday of last week, when our friends at Breitbart uncovered a story that sounds so much like a plot from The Hangover trilogy:

Breitbart News has exclusively obtained a heretofore unreported-on police report from days before the 2016 presidential election that describes how a cocaine pipe that authorities determined was used to smoke cocaine was found in a rental car returned to an Arizona Hertz location in the middle of the night. Also found in the vehicle were several personal effects of Hunter Biden, then-Vice President Joe Biden’s son, like two of his DC driver’s licenses, multiple credit cards, and personally identifying information like a Delaware Attorney General badge and a U.S. Secret Service business card that police said bore his name. Hunter Biden, according to the police report, had rented the vehicle from a location in California with the intent to return it to the Prescott, Arizona, location, where it was discovered the morning after it was dropped off with the drug paraphernalia and Hunter Biden’s personal effects inside.

Instead of returning the car keys to the drop box where after-hours returns are supposed to go, the car was returned—according to the police report—with the keys left in the gas tank compartment of the vehicle. Also found inside the vehicle, per the police report, were two drivers’ licenses both bearing Hunter Biden’s legal name Robert Biden, as well as “some credit cards with the same name,” “a secret service business card,” and an “Attorney General’s badge” all contained inside a wallet that Hertz rental employees discovered—along with a pipe that Hertz employees thought and police later confirmed was used to smoke illicit drugs, as well as “a white powdery substance in the arm rest of the vehicle.”

The next morning, according to the police report, a man who identified himself as “Joseph McGee” called the Hertz rental car counter to inform them of how the keys to the car were left in the vehicle’s gas cap rather than in the normal spot. “McGee” informed the rental car company employee, according to police, that “his friend was feeling sick so they didn’t know what to do” when the car was returned. Police, according to a supplemental report filed by a Prescott Police Department detective, sought and obtained a subpoena to discover the source of the “Joseph McGee” phone call—and traced it to a phone number owned and operated by a renowned “Colon Hydrotherapist” in the region.

Police attempted to find and interview “Joseph McGee,” but were unable to–and they also, per the documents, attempted to call Hunter Biden himself from the phone numbers he provided to the rental car company. Prescott Police Department officials were unable to reach Hunter Biden during the investigation for an interview on the matter, though, according to the documents, they did attempt to call him. One of the Prescott Police Department officers who responded to the initial scene wrote that according to his Sergeant, described in the report as “Sgt Small,” the Secret Service had informed the local police that “Robert Biden had been located by the Secret Service and was well.”

Laboratory analysis by the Arizona Department of Public Safety later determined that the pipe discovered in the vehicle was used to smoke cocaine, not meth, but fingerprints were not found on the device.

As his father launches yet another bid for the presidency, Hunter Biden has emerged as a major scandal-prone problem for the former Vice President and leading Democrat candidate for the 2020 nomination.

Geez, do you think this might be a problem?

Now I’m thinking that maybe my “Hangover” trilogy comparison is a bad analogy.

You’ve got your work cut out for you Uncle Joe. Hunter is no Chris Farley. (RIP)

Hunter Biden is far from credible.

No sane person would want him on the witness stand on their behalf.

I’d better stop there. I wouldn’t want Joe to start bleeding from his eyes again.

Kudos to Matt Gaetz for going where no one else had the guts to go!

Expose the insanity of these people and let the chips fall where they may.

Just make sure Hunter Biden isn’t in the same room because he’s been known to eat chips off the floor.