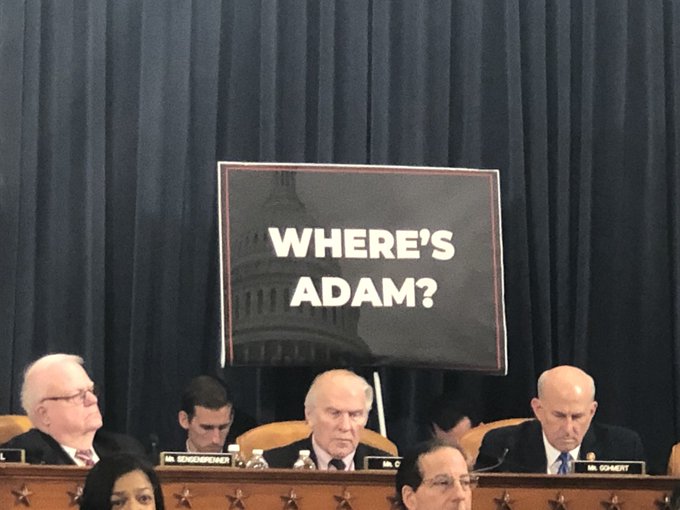 In case you missed it, and you probably did, there were lots of interesting signs at impeachment hearings this week.

I’m not schiffing you one bit.

These signs were at least mildly more entertaining than the hearings this week, though so are things like root canals.

They also put up a sign with Adam Schiff on a milk carton: Even though Adam Schiff isn’t on this committee, he’s positioned himself as a special prosecutor in this sham impeachment. This is his report, so why isn’t he at the hearing? Chairman Adam Schiff prided himself on being the special prosecutor in this sham impeachment.

But special prosecutors testify before Congress. Mueller did. Starr did. Where’s Adam Schiff?

Apparently he has something better to do today than to present his own report in person. pic.twitter.com/MwAXAyeSoE

They have a point.

Special prosecutors should testify before congress.

My guess is that he was actually in a paranoid frenzy trying to burn all evidence of his own Ukraine dealings, and maybe of his colleagues dealings as well.

I don’t know, he could have been trying to catch Rudy before he found something as well.

Too late on that.

Honestly, after a hard two weeks of impeaching sometimes a man needs a break.

But my honest guess is that he just needed the week off.

It’s hard to be the most hated man in America.

He’ll be back soon enough.