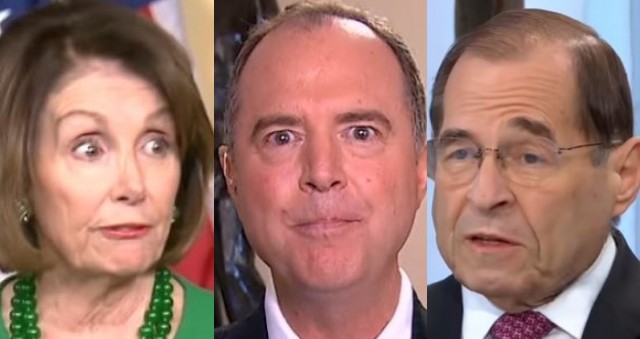 OPINION- (TNS) We’ve said it before and we’ll say it again: To be a Democrat, you have to lack the ‘hypocrisy gene’ because the Garbage Party exists as walking, talking examples of deceit and dishonesty.

House Democrats who have been ‘managing’ the impeachment hearings against President Donald Trump have broken rules, violated standards, shunned decorum, and, more importantly, prevented minority Republicans from engaging in a fair process.

The GOP couldn’t call witnesses. Proceedings were largely held in secret. Democrats could not find a single fact witness to testify to misdeeds by President Trump in his dealings with Ukraine. Etc.

But now, suddenly, after Senate Majority Leader Mitch McConnell (R-Ky.) on Friday announced he would be following the “lead” of the president’s attorney in any upcoming trial, Democrats and NeverTrumpers are gnashing their teeth and demanding fairness, by God!

“Everything I do during this, I’m coordinating with White House counsel,” McConnell (R-Ky.) told Fox News host Sean Hannity.

“We’ll be working through this process, hopefully in a short period of time, in total coordination with the White House counsel’s office,” McConnell continued.

“I’m going to take my cues from the president’s lawyers.”

The majority leader met with White House lawyer Pat Cipollone on Thursday to talk about a Senate impeachment trial, which many expect to begin after the Christmas holiday.

Cue the ‘outrage’ from the perpetually outraged.

“I’m going to take my cues from the president’s lawyers.”
— Mitch McConnell
Shouldn’t McConnell take his cues from 1) the Constitution, 2) the rules and precedents of the Senate, and 3) the requirements of a real and fair trial? https://t.co/4FjTJSfTxs

But there are other questions. The rules set by the Senate for the Clinton trial were adopted unanimously after they were worked out mutually by leaders Daschle and Lott. McConnell voted for them! There is no reason to abandon them. But there will be a Senate debate and vote

And of course, we can’t have simple political disagreement in America anymore; we must have perpetual disruption and something to rip away at the fabric of our civil society.

If McConnell continues to collude and four R's do not defect to demand a real trial with witnesses then peaceful, mass protest is in order. This should not stand.

And here comes former GOP’er Justin Amash, fresh off attending a Christmas party with the president and First Lady (because that’s what you do – you hobnob with a president who is destroying the Constitution):

Senators “shall be on Oath or Affirmation.”

“I solemnly swear that in all things appertaining to the trial of the impeachment of Donald John Trump, president of the United States, now pending, I will do impartial justice according to the Constitution and laws: So help me God.” https://t.co/xjDj3OHvRu

These dems have another thing coming to them- after all their garbage they have put our president and country through they better accept the fact that they are going to have theier a**es handed to them.

WHAT A FREAKING JOKE!