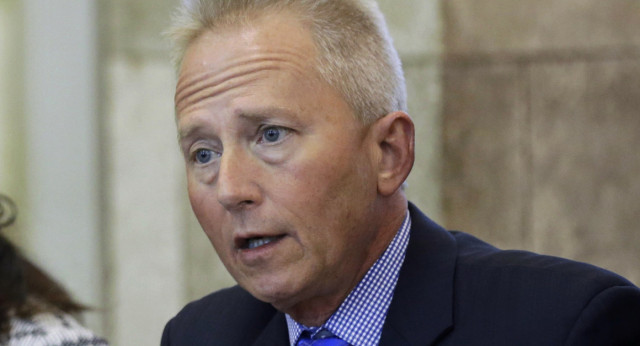 Jeff Van Drew has made his feelings known about the sham impeachment being run by his own party in recent weeks.

It is now being reported that he will be officially switch parties starting next week, but that would not come as a major shock if he follows through.

He may be the first in a lineup of many new Republicans.

Conservative Treehouse has this:

Jeff Van Drew is a democrat congressman from New Jersey CD-02.  According to multiple media reports he is likely to switch to the republican party next week due to the fraudulent impeachment effort.  Van Drew was one of two democrats who did not support the vote for the impeachment inquiry.

According to Politico Democrat leadership are in a panic and urgently trying to get ahold of Van Drew.  The optics of a democrat changing parties at the same time they are trying to sell the validity of an impeachment narrative are terrible.

[…] Van Drew’s congressional and campaign staff were informed he was planning to switch parties on Saturday, according to Democratic sources. The question was now when, not if, Van Drew was joining the Republican Party, according to several Democrats with knowledge of the ongoing conversations.

As of Saturday afternoon, it was still unclear if Van Drew would make the announcement before the House votes on impeachment, which is expected Wednesday.

And senior Dems have been scrambling to reach him all day.

Again, if/when Van Drew does switch parties it will be no surprise.

What may be more of a surprise is if others do not follow suit.

I’m sure there’s some electoral posturing going on here, but it’s still hilarious nonetheless. Pelosi is having a hard enough time keeping the moderates of her party in line, much less losing them to another party altogether.

The switch came after Van Drew met with President Trump, who no doubt whispered sweet nothings into his ear to push the defection through. This is extremely embarrassing for Democrats, who want to be seen as doing some higher form of duty by impeaching Trump. When the inevitable 10-15 more Democrats don’t switch parties, but do vote against impeachment, it’s going to sting even more.

Now, I’m some will try to claim Van Drew was a closet Republican or that this isn’t that big of a deal, but that’s nonsense. Having a party member switch sides in the middle of an impeachment fight is a big stinking deal. The Democrats have botched this from the beginning and it looks more and more likely that Trump will end up with the last laugh.

Many Democrats are starting to feel pressure from their constituents so look for impeachment to have a hard time passing The House.

If it does I would think it is Dead on Arrival in The Senate, but we can’t be sure it will even make it that far.

Democrats are in big trouble, but they are pot committed and must play out their hands now.

The BIG NAMES are pot committed, I mean.

The lesser known Dems like Jeff Van Drew and Cindy Axne have the chance to switch sides and look like heroes now, which is exactly why I would expect more defections to come.

Politicians on both sides tend to be fickle.

If the shoe were on the other foot I’m sure guys like  Mitt Romney would be the first to jump, for instance.

We should trade Romney for Van Drew and call Van Drew up to The Senate.

If only politics were a little more like baseball.