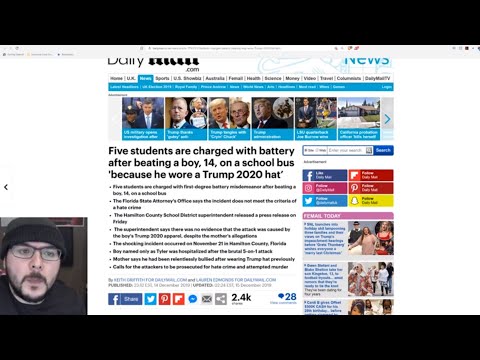 Ever notice how many AMERICAN stories would never hit the news if it weren’t for BRITISH media outlets?

That’s a big clue America and more proof that our media is corrupt.

Mitchell says the school district has investigated the incident, disciplined the students involved in the altercation and turned information over to the Sheriff’s office for criminal action.

Although social media was set ablaze at the implication that the beating happened because Tyler wore a MAGA hat, Mitchell contends that is not the case.

‘It is implied in the post that the altercation occurred because one of the students involved was wearing a political hat showing support for President Trump. There was no evidence found during the investigation that indicated the student was wearing of such apparel on a prior occasion motivated the incident,’ the statement reads.

She says Tyler is emotionally distraught as he reels from the incident and ‘he is crying most days.’

Following the November incident, Griffin says they no longer feel safe sending Tyler back to the high school and are considering other options, including homeschooling or moving to a different county.

The money donated to the GoFundMe will go towards purchasing ‘a good laptop computer and other supplies needed to be successful in a home school environment,’ for Griffin’s two sons.

The video first emerged on Thursday after the boy’s family retained attorney Foye B. Walker for possible legal action.

TimCast put out a video about the incident on Sunday:

It’s pretty well known that if you wear a “MAGA Hat” in America, you are setting yourself up for confrontation.

If you choose to wear a MAGA Hat, you had better be mentally and physically prepared to defend yourself.