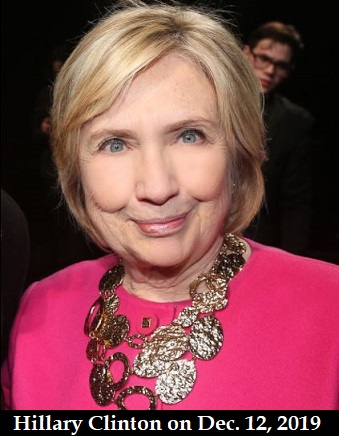 During the 2016 presidential campaign, I had remarked on the chamaleon-like ever-changing appearance of Hillary Clinton. (See my post of Sept. 3, 2016, “Chameleon Hillary Clinton is back to looking like sh*t — and the return of her medical handler”)

The beast has morphed again.

Daily Mail reports that last Thursday night, Dec. 12, 2019, Hillary Clinton, 72, “looked wonderfully youthful” and “radiant” with “a wrinkle-free complexion and plumped-up cheeks” as she joined Bill Clinton at the “Ain’t Too Proud: The Temptations Musical” on Broadway in New York.

Daily Mail points out that this is not the first time Hillary’s young-looking complexion has come under scrutiny:

“If it had started to make her look weird, she would have stopped it immediately.”

Clearly, Hillary is now ignoring that rule because she is looking weird after this latest round of “cosmetic” procedures.

More than weird, she is the stuff of nightmares.

See for yourself (you are forewarned!).