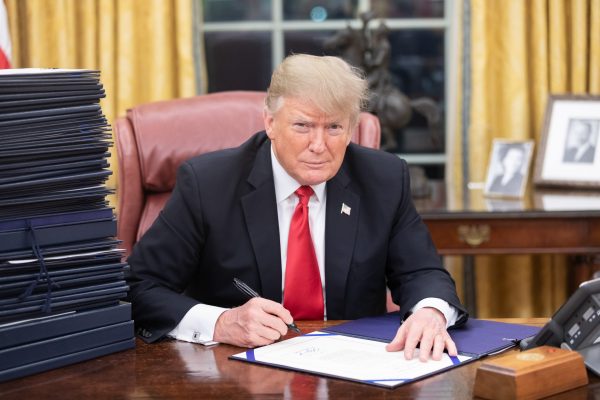 The bitter feud between President Trump and House Speaker Nancy Pelosi has just gone to an entirely new level.  On the brink of being impeached, Trump sent an absolutely scathing letter to Pelosi on Tuesday in which he accused her of “declaring open war on American Democracy”, “breaking your allegiance to the Constitution” and “interfering in America’s elections”.  In the letter, Trump said that he wrote it “for the purpose of history and to put my thoughts on a permanent and indelible record”.  Of course Trump knew that he would not be able to affect the ultimate outcome of the impeachment vote, but he wanted future generations of Americans to be able to look back and clearly understand what was being done to him.  This is the culmination of a long crusade by the left to try to take Trump out, but of course if Trump wins again in November 2020 there will be more attempts in the future.  The visceral hatred that they feel toward Trump comes out in everything that they do, and they are never going to stop until they are finally able to get rid of him.

Trump definitely understands that the primary reason why they are trying to impeach him is because they deeply hate him, and the six page letter that he just sent to Pelosi was full of emotion…

President Donald Trump, on the verge of becoming the third US president to be impeached, sent an extraordinary letter to House Speaker Nancy Pelosi on Tuesday, excoriating House Democrats and casting himself as a victim of an attempted coup.

A day before the full House is set to vote on articles of impeachment accusing him of abusing his power and obstructing lawmakers’ investigations, Trump wrote in his indignant six-page missive that Democrats would come to regret their efforts when voters cast ballots next fall.

For both Trump and Pelosi, this feud has become deeply personal.  Never before has the president of the United States sent such a letter to the speaker of the House, and we may never see such a letter again.  The following are ten of the key highlights from that letter…

#1 “This impeachment represents an unprecedented and unconstitutional abuse of power by Democrat Lawmakers, unequaled in nearly two and a half centuries of American legislative history.”

#2 “By proceeding with your invalid impeachment, you are violating your oaths of office, you are breaking your allegiance to the Constitution, and you are declaring open war on American Democracy.”

#3 “Even worse than offending the Founding Fathers, you are offending Americans of faith by continually saying you pray for the President when you know this statement is not true, unless it is meant in a negative sense.”

#4 “You know full well that Vice President Biden used his office and $1 billion dollars of US aid money to coerce Ukraine into firing the prosecutor who was digging into the company paying his son millions of dollars.”

#5 “Now you are trying to impeach me by falsely accusing me of doing what Joe Biden has admitted he actually did.”

#6 “You have developed a full-fledged case of what many in the media call Trump Derangement Syndrome and sadly, you will never get over it!”

#7 “You view democracy as your enemy!”

#9 “More due process was afforded to those accused in the Salem Witch Trials.”

#10 “Any member of Congress who votes in support of impeachment against every shred of truth, fact, evidence, and legal principle, is showing how deeply they revile the voters and how truly they detest America’s Constitutional order.”

If you would like to read the entire letter for yourself, you can find it right here.  It only takes a few minutes to read, and I think that most of you will find it very enjoyable.

When asked about the letter, Pelosi tried to claim that she hadn’t “fully read it”, but apparently she had read enough of it to come to the conclusion that it is “really sick”…

Pelosi responded to Trump’s letter, telling CNN, “I have no reaction. It’s ridiculous.”

She added, “I haven’t really fully read it. We’ve been working. I’ve seen the essence of it, though, and it’s really sick.”

If all of this wasn’t so serious, the interactions between Trump and Pelosi would probably be quite humorous.  Unfortunately, the future of our Republic is literally in their hands, and the damage that is being done to our political system is going to be immense no matter how this impeachment saga ultimately turns out.  Our nation is coming apart at the seams, and the very deep divisions that are ripping us apart are getting deeper with each passing day.

Following Trump’s letter, Pelosi sent out one of her own to her Democratic colleagues asking them to join her on the House floor on Wednesday morning…

She asked her fellow party members to join her on the House floor Wednesday morning when the House convenes to begin debate on the two articles of impeachment.

‘When the House convenes to take the impeachment vote tomorrow morning, I urge each of you to join me on the Floor,’ she wrote in what is a called a ‘Dear Colleague’ letter to lawmakers. ‘Our constituents look to us to be respectful of the Constitution and Defenders of our Democracy, and to proceed in a manner worthy of our oath of office to support and defend the Constitution of the United States.’

Pelosi knows that she has the votes, and she is going to deliver what the radical left has been clamoring for.

But in the process, could see be severely damaging her party’s chances of winning in 2020?

We just got some brand new numbers, and I think that what they show is going to absolutely shock you.  I will be posting my analysis of those numbers on The Most Important News later this evening, and I don’t want to give too much away, but they are very good news for Trump.

Pelosi and her minions intended to destroy Donald Trump, but they may have just guaranteed him four more years in the White House.

And for Trump, that would be the sweetest revenge of all.