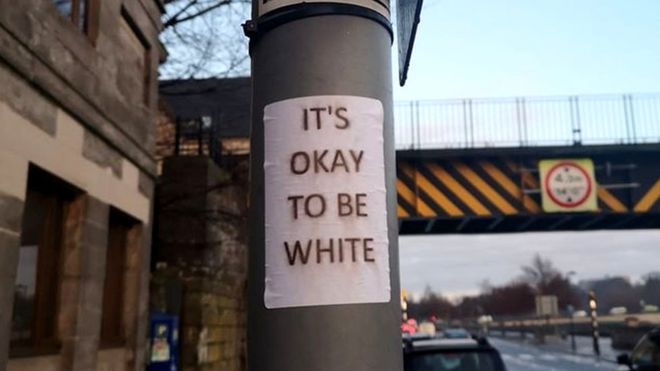 The “It’s Okay To Be White” movement has now gone international.

Apparently it’s NOT Okay to be white in Scotland either.

Here’s more from The BBC…

Scotland’s deputy first minister has condemned the appearance of stickers bearing the slogan “It’s ok to be white” in Perth city centre.

The stickers were posted on lampposts and drainpipes throughout the city at the weekend.

John Swinney, who is also MSP for Perthshire North, said the “atrocious” stickers had “no place in Perth or any other part of our country.”

Police Scotland said it was “currently looking into the matter.”

Posting on Twitter, Mr Swinney said: “We must stand together to resist this unacceptable material.”

Stickers bearing the same slogan appeared in Dundee in September.

The message originally appeared as a 2017 poster campaign in the US organised by an internet message board, with the aim of provoking reactions.

It was later picked up and spread by neo-Nazi groups.

Local group Perth Against Racism said it has been contacted by local people who said the appearance of the stickers had made them feel unsafe.

One person told the group: “I am certainly worried now for my daughters who are not white but are from Perth.

“It’s sickening and disgusting to know that people think like this.”

Read the rest at BBC…

Obama has to be behind this.

Sorry I couldn’t resist, but how many people even remember that Obama did that?

You would think that might enter the current impeachment conversation in America.

But I digress, as usual, so let’s get back on topic.

Sadly it seems like it is not okay to be white in some countries these days.

We all know what’s happening with the Muslim Invasion of Europe as well.

Whitey doesn’t stand a chance and whitey needs to accept that.

Hopefully they arrest the perpetrators and throw the book at them.

The rest of us white people could then resume our favorite past time of wallowing in self-hatred.

What the hell is wrong with this world?

IT IS DEFINITELY OKAY TO BE WHITE, OR WHATEVER OTHER COLOR GOD MADE YOU!!!