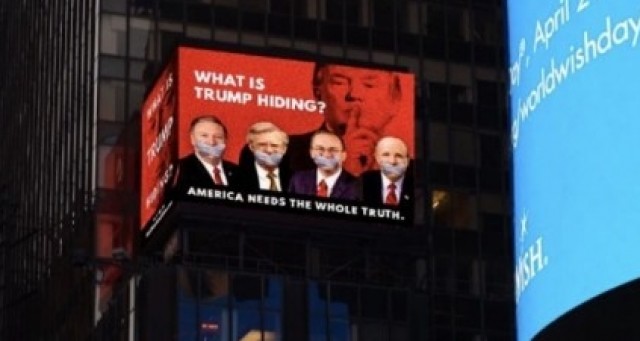 (TNS) A group of disgruntled #NeverTrump Republicans who were associated with or staffers of the Reagan and Bush administrations are behind the funding of an anti-Trump visual ad in Times Square in New York City.

As the photo above demonstrates, the ad features Trump with his finger to his mouth and four of his current or former officials — including Secretary of State Mike Pompeo, former National Security Advisor John Bolton, acting Chief of Staff Mick Mulvaney, and presidential attorney Rudy Giuliani — asking, “What is Trump hiding?”

The ad isn’t likely to sway many people in the Big Apple as most residents are Left-wing Democrat voters who despise the president anyway.

But the more noteworthy development is who backed the ad in the first place.

While much of the ‘mainstream’ media is portraying the billboard as work of “an anti-Trump Republican group” without disclosing of who they are, a deeper dive by the folks at SaraACarter.com discovered:

In fact the group responsible for this is none other than, ‘Republicans for the Rule of Law‘ who define themselves as a “coalition of Republicans who believe law enforcement investigations should be completed without political interference, the laws apply equally to everyone, and the Constitution needs to be followed.”

But when you take a closer look at the ‘Republicans for the Rule of Law’, you discover that they are a project of ‘Defending Democracy Together‘ which is a 501(c)(4) advocacy organization created by former officials who have served in Reagan and Bush Republican administrations.

The leadership list of ‘Defending Democracy Together’, lists as Directors some of the most anti-Trump personalities, like Bill Kristol, Christine Todd Whitman, Linda Chavez, Bob Inglis, and many others (the full list is here).

We’ve said it before: With “Republican” friends like this, Trump doesn’t need any Democrat enemies.

The most anguishing thing about so-called Republicans like these who continue to oppose the president is this: He’s actually implementing the very same policies these pinheads have been pushing for decades.

But because they don’t like him personally (and, likely, because he wouldn’t bring any of them into his administration after they bad-mouthed him for a year before he won the 2016 election), they have joined with the Left to bring him down.

All of which makes us wonder if these people every really believed in conservatism to begin with.