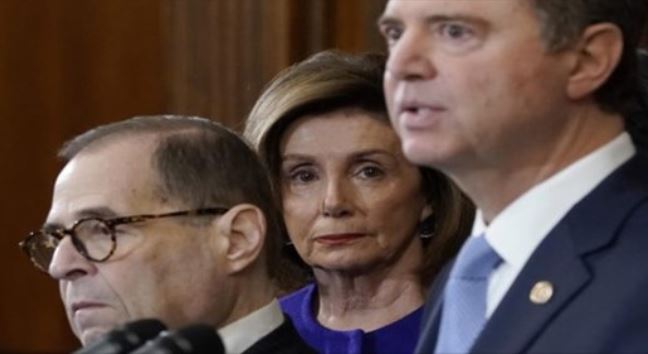 Regardless of how today’s vote to impeach President Donald Trump ends up, one thing is absolutely certain, today’s Democrats cannot be trusted with protecting and defending the Constitution they swore to uphold.

Today’s Democratic Party, and their enlistment of Lawfare anarchists to corrupt the interpretation of our laws so that an ignorant, venal segment of our society will have a reason to continue supporting them is unacceptable.

It should be clear to everybody that a successful America, one where the citizens work and pay their own bills, are free to make decisions for themselves, and are protected in their daily lives, is antithetical to everything today’s Democratic Party propounds.

We’ve arrived at the point where the entire Democratic Party has been forced to accelerate their ultimate agenda for America’s decline before President Trump’s record of successfully restoring our nation’s prosperity continues to render Democrats an irrelevant third party serving a permanent minority.

“Our movement is about replacing a failed and corrupt establishment with a new government, controlled by you the American people.

“The Washington establishment and the financial and media corporations that fund it exists for only one reason, to protect and enrich itself.

“The establishment has trillions of dollars at stake in this election for those who control the levers of power in Washington.

“And for the global special interests they partner with, these people that don’t have your good in mind, our campaign represents a true existential threat…

“…The political establishment that is trying to stop us is the same group responsible for our disastrous trade deals, massive illegal immigration, and economic and

Trump’s words were a shot across the bow of Democrats’ plans to turn America into a socialist state that would serve as their personal piggy bank. And, they realized it.

This was not a coincidence. Nothing that Democrats and their Soros-funded anarchists have staged since the election has been an accident.

The new president had barely finished being given the oath of office when the Democrat Party’s official mouthpiece, the Washington Post, announced the campaign to impeach him had begun.

The despicable pussy-hats protesting President Trump’s inauguration, before he’d done anything other than promise to uphold the Constitution in his official capacity, cannot be reasonably explained.

President Trump’s successful restoration of the economy that improved opportunity for every demographic has only made the need to remove him more urgent.

in 7½ yrs under President Obama (from end of recession thru Jan 2017) rose just $1,000'@StephenMoore data we showed @NextRevFNC recently:https://t.co/bqDsb89taD

Since Steve Hilton posted that tweet, President Trump has returned more than $5,000 to working American households that otherwise would have wound up in the hands of multinational corporations, international bankers, foreign countries and most significantly, in the hands of the politicians who facilitate these transactions.

Democrats want you to trust them, that they are doing the right thing for America. Our children are $23 Trillion dollars in debt largely due to their Marxist agenda.

Now their candidates are proposing adding new programs that will add anywhere between $60 Trillion to $100 Trillion to that debt total in the next ten years.

These are not the faces of people who have America’s best interests in mind.

What more would the platform they’re running on have to include need to include to prove they’re outright Socialists.

Coupled with their unbridled use of the raw political power they were entrusted with, that is a blatant attack on our Constitutional government and the division of powers prescribed therein, proves they’re outright Marxists.

By any means necessary means exactly that. Including impeaching America’s most successful president in at least the last three decades.

It is not enough to simply beat these Democrats. They must be destroyed thoroughly. Their kind must not rise again.

Now, it is our turn to #Resist or “we will spend our sunset years telling our children and our children’s children what it was once like in the United States where men were free.”