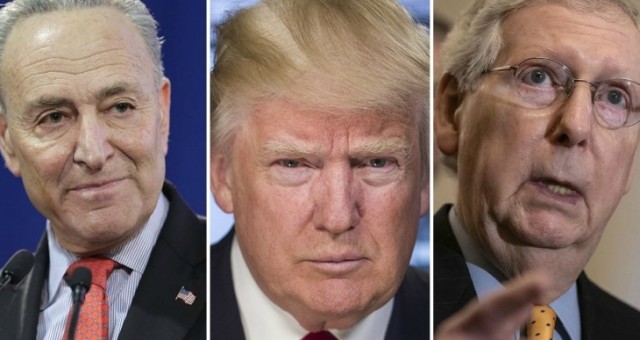 (TNS) As House Democrats prepare to impeach President Donald Trump on Wednesday, they are acutely aware — as they have been warned — that there is virtually no change he’ll be convicted in the Senate and removed from office.

So the Garbage Party will simply be satisfied with being able to say that Trump is now among the few ‘impeached presidents’ in U.S. history, knowing the blemish will accompany him throughout history, right?

Byron York of the Washington Examiner:

With a House impeachment vote a foregone conclusion, the battle to remove President Trump from office has moved to the Senate. Minority Leader Chuck Schumer grabbed control of the debate Monday with demands for what he called “fairness” in the president’s trial. …

Republicans will respond that the Senate is not the place for fact-finding — that is, for senators to become investigators and do what the House declined to do. Some will also note that the House chose not to seek the appointment of an outside investigator, a special counsel, to establish what happened in the Trump-Ukraine matter, and the Senate is ill-equipped to play that role. …

Schumer is not trying to convince all 53 Senate Republicans to support his proposal. He just needs four. There are 47 Democrats in the Senate. If Schumer can persuade four GOP senators to join Democrats, they’ll have a majority of 51 and can force the calling of new witnesses.

If Schumer gets what he wants, it seems hard to believe that will be the end of it. The request for more witnesses appears designed to lead not to closure but to reopening the case against Trump. In this way, if Democrats can introduce new testimony in the trial, they can say the new testimony has raised new questions that will require new investigation. And a new investigation will require more new witnesses, which will surely lead to more new questions, which …

The bottom line is: Republicans should not believe for one minute that the campaign to remove the president will rely only on the case Democrats have built in the House. Schumer and other party leaders will scramble for new information to throw at the president, and at Republicans, until it is over. The GOP, and the White House, need to be ready.

Already, House Intelligence Committee chair Adam Schiff (D-Calif.) is playing his role. He’s accused Vice President Mike Pence of being complicit in the ‘crimes’ of the president by attempting to cover them up.

One way this could happen, politicos opine, is by Democrats getting their grubby, partisan paws on the Mueller report, compliments of an Obama judge.

Once that happens, Dems would hope to find some juicy tidbit of information or, barring that, some piece of some thing innocuous that they could release (leak) out of context to their waiting sycophants at the NY Times or Washington Post.

Then as we get into October, there will be yet another “bombshell.” It’s going to happen and Republicans need to be prepared to combat these types of games instead of looking for excuses to fold as some did in 2016.

Recall, some Dems have said within the past few days they will simply try to impeach the president again, for something else, in the future, if they can.

So when Trump wins in 2020, this hell will repeat itself — over and over again, even if Republicans win back the House and keep the Senate. Only then, in terms of the former, the Garbage Party won’t be able to launch any new probes or conduct sham investigations.