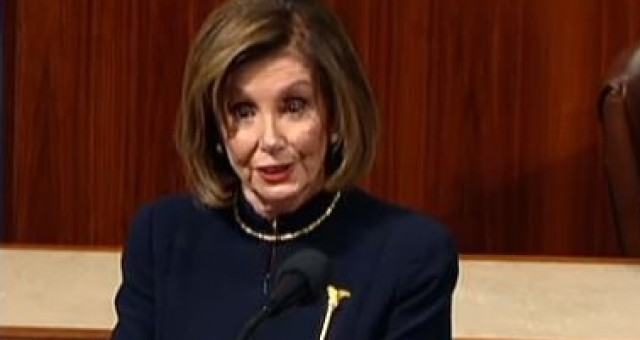 House Speaker and California Rep. Nancy Pelosi, the Wicked Witch of The House, should be ashamed of herself and her disingenuousness.

The Speaker, on Wednesday, stood before Congress and recited the Pledge of Allegiance and said how important it was to our nation.

She carried in clipart of the American flag, because why bring the actual flag and make her constituents furious?

And under the photo of the flag was the caption “to the republic, for which it stands” as she claimed the president threatened the republic when he spoke to Ukrainian President Volodymyr Zelensky.

“My colleagues, this morning and every morning when we come together, members rise and pledge allegiance to the flag.

“Every day, all across America, children in schools, members of the military, officials, and those civically engaged also pledge allegiance to the flag. Let us recall what that pledge says,” the Speaker said.

“I pledge allegiance to the flag of the United States of America. And to the republic, to the republic, for which it stands, one nation, under God, indivisible, with liberty and justice for all.

“The republic for which it stands is what we are here to talk about today. A republic, if we can keep it,” she said.

“We gather today under the dome of this temple of democracy to exercise one of the most solemn powers that this body can take, the impeachment of the president of the United States,” she said.

“No member, regardless of party or politics, comes to Congress to impeach a president, but every one of us, as our first act as a member of Congress, stood on this historic House floor before our beautiful American flag and raised our hands in this sacred oath, ‘I do solemnly swear that I will support and defend the Constitution of the United States against all enemies, foreign and domestic, so help me God,’” she said.

She is probably lying when she says that no member of Congress came there with the intention to impeach the president.

California Rep. Maxine Waters, in near every speech she has given since President Trump was elected, shouted “Impeach 45.”

Texas Rep. Al Green introduced Articles of Impeachment in 2017 based on “high misdemeanors” and had 58 Democrats vote in favor.

He again introduced Articles of Impeachment in July 2019 and again he was defeated, this time with 95 Democrats voting with him.

And let us not forget Michigan Rep. Rashida Tlaib who, in her victory speech, told the story of how she told her son she was going to Washington to “impeach the m***erf**ker.”

To say that Democrats did not go to Washington to impeach the president is a lie and the Speaker knows that it is a lie.

She has been lying to the American citizens from the start of impeachment and she is not going to stop anytime soon.