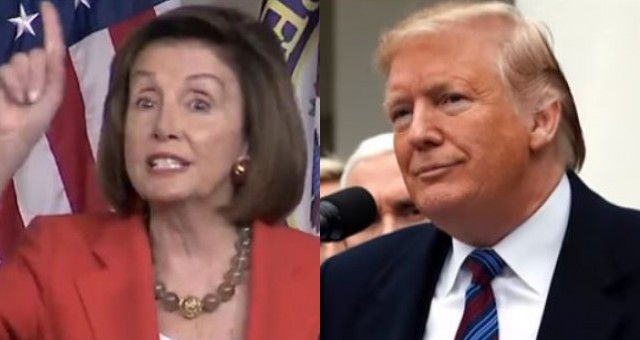 Pelosi Won’t Guarantee That She’ll Send Trump Articles Of Impeachment To The Senate…So Now What?

(TNS) President Donald Trump became just the third U.S. president in our history to be impeached on Wednesday, but the first to be impeached for not having committed a single “high crime or misdemeanor.”

And apparently, House Speaker Nancy Pelosi is well aware of that.

She couldn’t stop the clamor for impeaching the president over Ukraine or phony ‘Russian collusion’ or some such, but she now appears poised to stop the Senate from breezing through a trial with an acquittal — or actually holding a trial featuring witnesses who will blow gargantuan holes in Democrats’ accusations, all on live TV that many a Trump supporter will tune into (unlike the fake House impeaching hearings).

So when asked repeatedly on Wednesday following the party line vote to impeach, Pelosi would not commit to even sending the articles over to the Senate.

Nancy Pelosi won't commit to sending the House Democrats' sham articles of impeachment over to the Senate.

Basically confirming what we've known all along this impeachment is a WITCH HUNT & A SHAM! pic.twitter.com/2KGQBkIsSE

‘Go out and play in the snow?’ WTH is she talking about? ‘Not part of our conversation?’ Huh?

Because that’s how it works, according to the Constitution.

The House returns articles of impeachment and sends them to the Senate where there is then an impeachment trial.

Seems like she’s trying to use the articles to hang over Senate Majority Leader Mitch McConnell’s (R-Ky.) head, using the propaganda media to browbeat him into essentially allowing Democrats to run things in a chamber Republicans control.

First, the Garbage Party’s media, which has covered the impeachment hoax wall-to-wall, didn’t move the needle one iota in favor of removing the president from office.

Just the opposite has happened, in fact, if you believe in polling data (and even CNN’s Jeffrey Toobin refused to believe his network’s polling showing support for impeachment down by double digits among Democrats).

Folks, this might be the greatest compliment McConnell has ever received. They are seriously entertaining holding a grenade with the pin pulled rather than facing what happens when they send it over McConnell’s wall. https://t.co/OeD5JzsvwS

First of all, Democrats don’t control the Senate so they don’t get to make the rules, Republicans do. Secondly, as Manu Raju points out, Pelosi won’t describe publicly what a “fair trial” means to her though we know what it means — it means that Democrats call all the witnesses and Republicans are forced to take a back seat.

Others say that since there is no constitutional provision specifically outlining how articles must be ‘transmitted’ to the Senate from the House, McConnell can merely assume that they have been since the House has already held a formal vote.

That would mean he’ll schedule a trial date at some point in the very near future and allow Democrats to flail and wail on their favorite little-watched TV networks while Republicans get down to the business of acquitting Trump and embarrassing the Garbage Party.