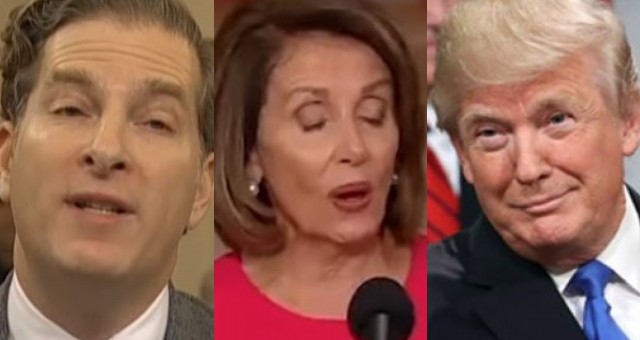 Guess everyone in the Left-wing media spoke too soon…

(TNS) Well, it looks like the Left-wing ‘mainstream media’ was a little premature in gloating over the supposed impeachment of President Donald Trump.

According to Prof. Noah Feldman, a Leftist law school professor Democrats called before their sham impeachment inquiry last month, the president isn’t formally impeached until the House of Representatives transmits the articles of impeachment to the Senate for trial.

He writes in Bloomberg:

According to the Constitution, impeachment is a process, not a vote.

If the House does not communicate its impeachment to the Senate, it hasn’t actually impeached the president. If the articles are not transmitted, Trump could legitimately say that he wasn’t truly impeached at all.”

The Constitution doesn’t say how fast the articles must go to the Senate. Some modest delay is not inconsistent with the Constitution, or how both chambers usually work.

But an indefinite delay would pose a serious problem. Impeachment as contemplated by the Constitution does not consist merely of the vote by the House, but of the process of sending the articles to the Senate for trial.

And, recall, House Speaker Nancy Pelosi (D-Calif.) said Thursday morning following the Wednesday vote to ‘impeach’ that she had no immediate plans to transmit those articles to the Senate until she’s sure she’ll get a ‘fair trial’ (which is really her out).

Feldman argued vehemently that President Trump should be impeached. He was also outed as a partisan who has been advocating impeachment for years, by the way.

Remember that asterisk Democrats say will now be added to the history books next to Trump’s name? Yeah, instead of referring to “impeached” it’ll be, “not really.”

So, are we going to get these articles transmitted, or what?

Not anytime soon, according to the No. 2 Democrat in the House, Rep. Steny Hoyer (Md.).

Hoyer announces no more votes until January 7. Big cheer goes up in House chamber. This means the House won't approve a resolution on impeachment mgrs & to send impeachment pkg to Senate until at least January, 2020