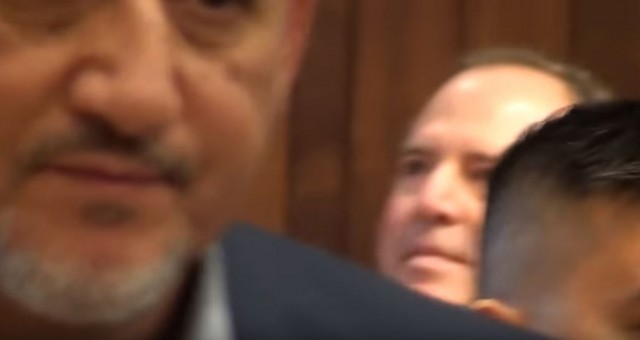 Opinion| Mark Sidney| Adam Schiff seems to be learning the hard way that actions have consequences.

As Chairman of the House Intelligence Committee, Adam Schiff crafted absurdly Stalinistic rules for this sham, show trial, ‘impeachment’. The proceedings have more of a feeling of a ‘legal’ coup, than they do a legitimate Democratic proceeding.

Representative Meadows spoke to the Washington Examiner and explained just how tyranical the were rules were:

“It’s totally one-sided,” … “They can continue to do secret depositions. They have noticed depositions for John Bolton and others next week in anticipation of a positive vote Thursday. All it does is limit the committees that will be involved in the depositions.”

Republican, Rep. Brad Wenstrup, told the outlet: “There’s no guarantee we can call any witnesses,”

We all know how Schiff’s sham committee hearings turned out.

The hearings did give the Republicans, and especially Nunes, enough time to publicly embarrass, and call out Schiff, durning the ‘pre-show trial’.

These were not the only body blows Nunes’ landed on Shifty Schiff:

Well, things did not go much better for Adam when he came home to California for a town hall event.

‘During a town hall organized by the Armenian National Committee of America and held in Glendale, California, Schiff wasn’t able to get though more than a few minutes of his speech before being shut down by angry Americans.

He should have known it was coming — after all, the lawmaker was booed from the moment he walked across the stage at Saturday’s forum.

It took less than two minutes for shouts of “liar” to come from the crowd.

Several people began yelling negative comments about Schiff and his role in the partisan impeachment process.

“You should be in jail,” one fed-up man shouted. “You are a disgrace to the House of Representatives. You will be going to jail for treason!”’

You can watch the video below:

Yet again, it seems that we are learning that the country is not happy with the Democrats, nor the way they have handled these successive, seemingly never ending, coups.