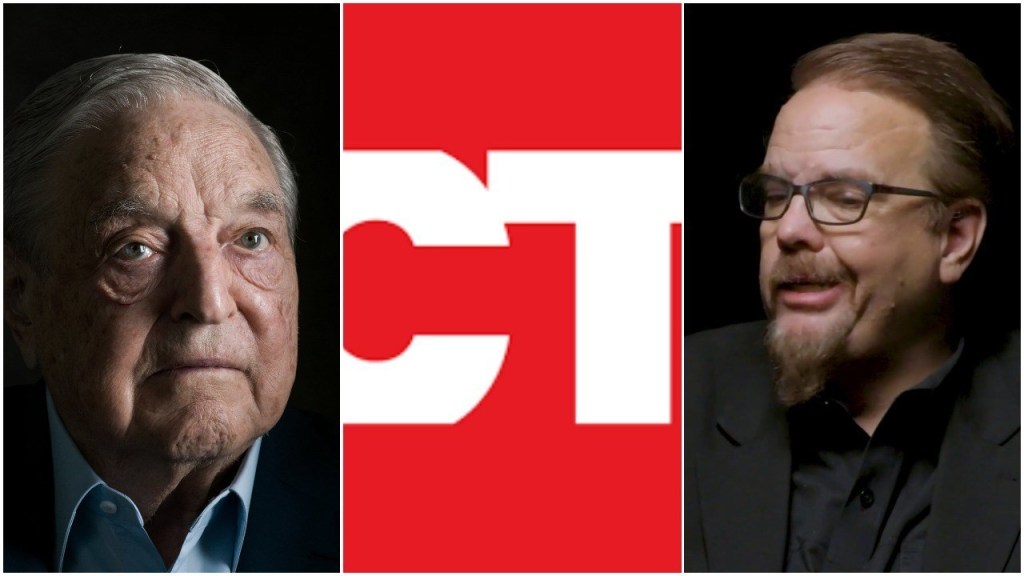 Christianity Today magazine has a print circulation of approximately 130,000, of which approximately 36,000 is free, and readership of 260,000,[1] as well as a website at ChristianityToday.com. The founder, Billy Graham, stated that he wanted to “plant the evangelical flag in the middle of the road, taking the conservative theological position but a definite liberal approach to social problems”.[4] == WIKIPEDIA

I loved Billy Graham, and likewise have much respect for his son Franklin who carries on his Father’s work.

But Christianity Today has now strongly endorsed the impeachment of President Trump and it’s time to expose them as the false teachers they are.

Do you realize that Christianity Today is partially funded by George Soros?

From Pulpit and Pen:

Christianity Today called for the U.S. Senate to affirm the impeachment of the U.S. House against President Donald J. Trump. As you soak that in, we’ll remind you that it’s already been reported by this publication (and others) that Christianity Today is a Soros front organization.

The post, previously mentioned in an earlier article today entitled Top Three Liberal Articles from Democrat Rag, Christianity Today, was written by Alan Atkinson earlier this year and first published at the Capstone Report. The article referred to is Christianity Today and Ed Stetzer Partner with Soros Immigration Invasion.

George Soros, the wealthy billionaire Democrat financier, “rents evangelicals;” a fact that has been widely reported and indisputably and broadly claimed (like in this article at the Washington Post).

Christianity Today is in “cahoots” with Soros in a verifiably documented way. It should come as no surprise they’re calling for Donald Trump’s impeachment.

Christianity Today, an evangelical magazine, has mostly concentrated on the spiritual, not the political, during its 63 years in existence. So the editorial it published Thursday went over like a thunderclap from on high: Editor Mark Galli wrote that President Trump should be removed from office, describing him as “a near perfect example of a human being who is morally lost and confused.”

Trump’s fiery denunciation (“a far left magazine [that] . . . knows nothing about reading a perfect transcript of a routine phone call,” he tweeted) and the massive news coverage the editorial received Friday suggested it marked a watershed moment. The implicit idea was that evangelicals — one of Trump’s key voting blocs — had finally turned on the president after years of ignoring his trampling of at least a few of the Ten Commandments.

In fact, Christianity Today (known popularly as CT) is just one of a number of media outlets catering to evangelicals and one that speaks for the more centrist faction of them, one of the smallest segment. Evangelicals tend to identify as politically conservative and have remained overwhelmingly supportive of Trump.

George Soros is buying the support of America’s churches to do his evil bidding.

Here is a related report from Capstone Report:

Malkin also helpfully explores the Soros links to immigration groups looking to destabilize the United States. Soros backs not only the Evangelical Immigration Table via his support for the National Immigration Forum, but also “National Council of La Raza (“The Race”), which is now known as UnidosUS,” according to Malkin.

In short, Soros has spent a lot of money on a lot of different organizations to change US immigration policy. That includes a growing influence on American evangelicals. The EIT is just one example of the Soros reach.

As George Soros is trying to buy America’s churches and Christian media, it is important to remember some of the other causes he endorses and supports.

Soros is an old man that thinks he can buy his new world order/one world government dream before he dies.

It is important to expose those that take his blood money.

Christianity Today is not who you think they are.

Franklin Graham needs to make a statement soon and distance himself from the insanity going on at CT.

His legacy and, to an extent, his Father’s legacy are at stake.

I can’t believe that Churches and Christian organizations are supporting this faux impeachment.

The Deep State is everywhere and it is even poisoning the proud Christian foundation of our great nation.

Please pray for guidance and research because Christianity Today is not the only organization trying to poison the Christian well.