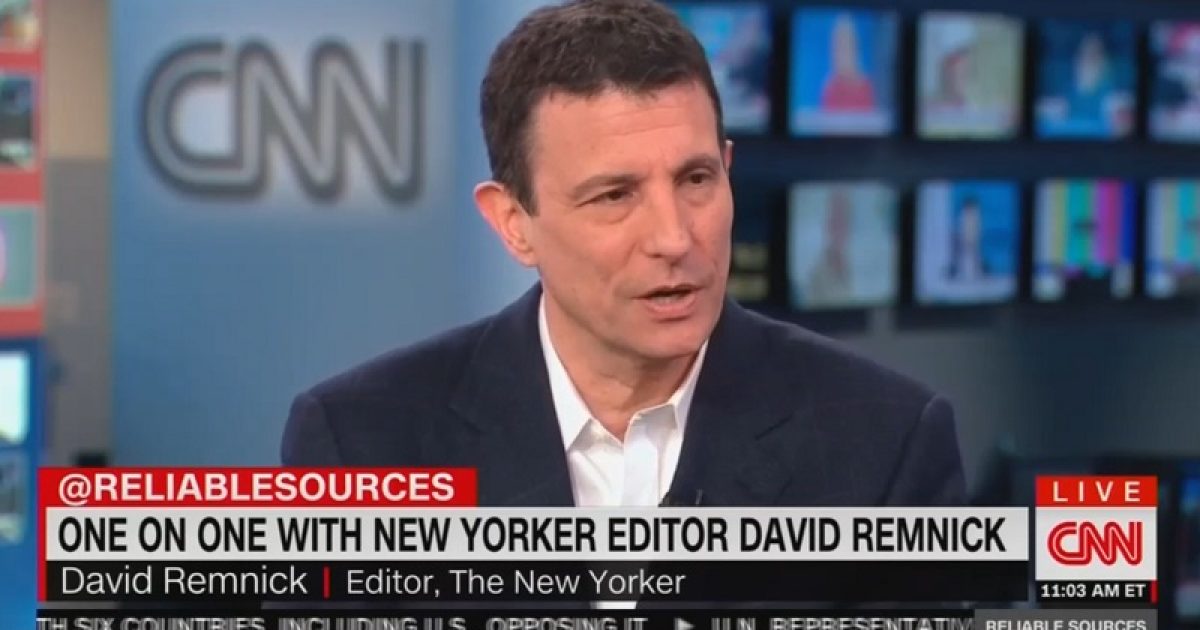 While appearing on Sunday’s edition of CNN’s “Reliable Sources,” New Yorker editor David Remnick told propagandist Brian Stelter with a straight face that the Democrats’ sham impeachment of President Trump is “about the future of the earth.”

“Because we’ve seen the Republicans stuck where they are. Their illusions about Trump remain, and you’re right to describe it as a flat line. Here’s what I hope that we understand. That the — the stakes here are immense. It’s just — it’s not just about the political future of one man, Donald Trump. It’s about the future of democracy and democratic process and this is a — a trend throughout the world. It’s about the future of the Earth. We have a party that has decided to be disbelieving about climate change. It’s about issues as essential as that,” he said.

“And right now you have a country that is split, and to great frustration of people like you and people like me, we don’t somehow understand. We don’t understand why the evidence of things, why facts don’t penetrate so many of our brothers and sisters in the United States of America. And this is a source of great frustration for the press,” he added.

Twitchy noted that “if it’s about ‘the future of the earth,’ the House Democrats sure don’t seem to be in any rush to sent the articles of impeachment to the Senate.”  Maybe Jane Fonda would like to send them to a special Nuremberg-style trial to face a possible death sentence.

Response on Twitter was pretty much what you’d expect:

Remnick: We have to save democracy by throwing a democratically elected president out of office, because he causes bad weather, or something. #LeftWingScience #ClimateTwitter https://t.co/9a8PhftY4s

Translation: we the almighty media cannot convince Americans of our lies.

That’s pretty much it.

If more evidence was needed that Remnick was a left-wing activist and not a journalist, he decried how the GOP continued to back their President throughout the partisan impeachment process. “This is not exactly profiles and courage time,” he chided. “These people are — people are themselves lacking character and courage. And it has to be said straight up.”

Yeah, CNN was totally all about news and not opinion peddling. Right, Brian? This is CNN, unreliable sources.