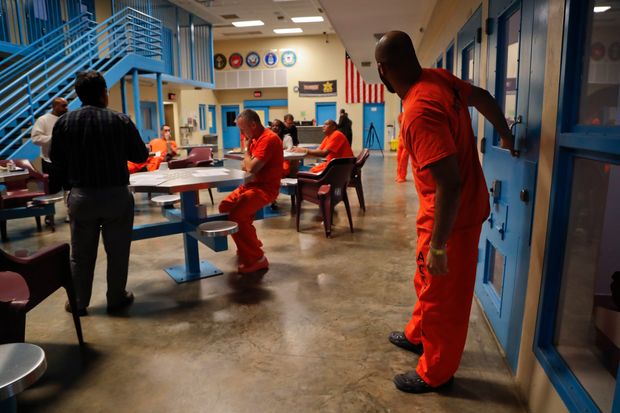 Why should laws, especially those of the soon-to-be-demographically-supplanted white man, apply to saintly people of color?

Especially when those laws disproportionately apply to people of color, forcing them into enclosed rooms at the expense of the taxpayer?

Just release them upon the community, regardless of why they were locked away.

After all, they are people of color, vibrant individuals collectively comprising the inevitable non-white future of New York and the United States. [Ending bail reform: Why some NY Republicans lawmakers want the law tossed, Democrat and Chronicle, December 19, 2019]:

Senate Minority Leader John Flanagan contended the reforms — set to take effect Jan. 1 — will endanger the public and place another unfunded mandate on communities at a time when the state is facing at least a $6.1 billion deficit.

“At the end of the day, we don’t believe these changes in the law are going to keep people safer,” Flanagan, R-Suffolk County, said at an Albany press conference.

The reforms will end cash-bail for most non-violent felonies and misdemeanors and revamp the state’s discovery process, requiring prosecutors and law enforcement agencies to turn over evidence to the defendant within 15 days after arraignment.

“We think our society and walking about the streets are going to be bigger challenges then it was before,” Flanagan said.

Senate Republicans, he said, will likely make concerns surrounding the reforms a key issue in next year’s election when all 63 seats in the chamber are on the ballot.

Democrats hold 40 of the seats, and eight of the 23 current Senate Republicans have declined to run for re-election in 2020.

Joining Flanagan were the Deputy Minority Leader in the state’s Senate, Joesph Griffo, and Fulton County Sheriff Richard Giardino, who spoke on behalf of the state’s Sheriff’s Association.

Republicans, law enforcement officials and district attorney’s across the state have for months criticized the reforms and want a moratorium on their implementation.

They have argued that they should have a greater opportunity to weigh in and give counties additional time to prepare.

Proponents of the measures have said fears over the reforms are overblown and Democratic lawmakers — who hold the majority in both chambers of the state’s Legislature — have expressed no interest in delaying their implementation.

“The reality is all these reforms will save taxpayer money, improve monitoring and oversight for suspects of low-level crimes, protect New Yorkers’ rights, and keep our communities safe,” Mike Murphy, a spokesman for the Senate Democrats, said in a statement.

Giardino said law enforcement officials are in favor of criminal justice reforms, but added the current changes have “a lot of issues that are going to impact the public in a lot of ways.”

The new bail law, he said, would allow burglars caught redhanded to be released on an appearance ticket before the victim returns home after giving their statement.

And the changes to discovery are an “unfunded mandate” that would a add an additional strain rural counties across upstate already constrained by limited resources.

Gov. Andrew Cuomo, who’s made reforming the state’s criminal justice system a key component of his administration in recent years, has said counties can carry out the reforms with preexisting resources.

But proponents of the reforms argue cash bail has disproportionately impacted people of color and individuals of low income who could not afford bail.

The state’s criminal justice system, they say, has become reliant on money rather than rehabilitation.

More than 3,800 people currently held on cash bail are expected to be released once the reforms take effect next month, most of whom are being held in county jails upstate.

A new report released by the Brooklyn Community Jail Fund, which works to free individuals held on cash bail, found families paid an estimated $4.8 million to place phone calls to loved ones currently incarcerated in county jails in 2017 alone.

The report examined financial data from 19 counties outside of New York City obtained through a series of Freedom on Information Law Requests.

But the monetary costs are just a fraction of what families pay each year, said Peter Goldberg, the group’s executive director.

“Between lost wages, attorneys, and travel — not to mention the emotional toll — there is a deep societal cost to incarceration,” Goldberg said in a statement.

Those who do evil to others should be in jail, but in our world, the inverse true: those who do evil should be free to perform more nefarious acts upon the law-abiding, because people of color are disproportionately impacted by having to pay cash bail for their lawlessness.