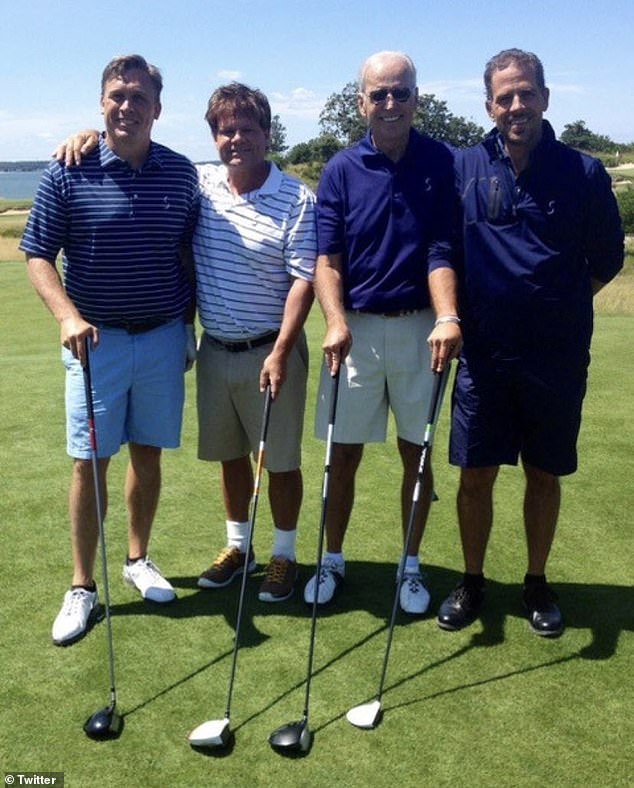 It seems that Lunden Roberts is now demanding sole custody of the child fathered by Hunter Biden.

Does anyone else think Biden will have a problem with that?

But the real story is the dirt that attorneys are trying to bring to the forefront in the midst of a child custody case.

Cheyenne Roundtree, writing for The Daily Mail has a couple of real eye-openers stemming from the Roberts/Biden battle.

Hunter Biden’s Arkansas baby mama has cast him as a dead beat dad in their high profile paternity suit, demanding sole custody of their child, as the businessman is linked in court papers to ‘multiple criminal probes involving fraud, money laundering and a counterfeiting scheme.

Lunden Roberts demanded custody of their 16-month-old child, claiming Biden wouldn’t even be able to ‘identify the child out of a photo lineup’, according to court papers filed in Independence County, on Monday evening.

The 28-year-old said Biden is a ‘stranger’ to their toddler, as she also filed a motion seeking the court to find Biden in contempt for not handing over his relevant financial records for the past five years.

Now for the juicy stuff that is not being reported…

Casey also claims that Biden and John Kerry’s stepson Christopher Heinz are involved in a $150 million counterfeiting scheme in Ukraine.

But the judge in the case took just six and a half hours to toss the claims out, saying they had not been filed properly.

Biden’s lawyer Brent Langdon called Casey’s attempt to get involved ‘a scheme by a non-party simply to make scandalous allegations in the pending suit to gain some quick media attention,’ and asked for it to be stricken from the record. He asked Judge McSpadden to award Biden costs against Casey.

He said Heinz, Kerry’s 36-year-old stepson, was also in on the scheme, as was a third man, Devon Archer, who has also had links with the Ukrainian energy company Burisma, that has been at the center of Biden’s entanglement in President Donald Trump’s impeachment.

Casey’s allegations surround a federal trial in New York last year in which Archer and two other men were found guilty of security fraud by issuing bonds for a Native American tribe. Archer’s conviction was overturned on appeal.

He said that during the five-and-a-half-week trial the defendants ‘provided evidence showing…Hunter Biden’s association and he did drum up business for the scheme.’

Under Arkansas law, anyone claiming an interest in a court case can intervene. The court then has to decide if the intervener’s interest is valid.

ROBERT KHUZAMI, Attorney for the United States, Acting Under Authority Conferred by 28 U.S.C. § 515, announced that JOHN GALANIS, a/k/a “Yanni,” DEVON ARCHER, and BEVAN COONEY were each convicted today of conspiracy to commit securities fraud and securities fraud, following a five and half week trial before U.S. District Judge Ronnie Abrams.

According to the allegations in the charging documents and statements made in court proceedings:

From March 2014 through April 2016, JOHN GALANIS, ARCHER, and COONEY, along with their co-conspirators Jason Galanis, Hugh Dunkerley, Gary Hirst, and Michelle Morton, engaged in a fraudulent scheme that involved (a) causing the Wakpamni Lake Community Corporation (“WLCC”), a Native American tribal entity, to issue a series of bonds (the “Tribal Bonds”) through lies and misrepresentations; (b) deceptively causing clients of asset management firms controlled by Morton and others to purchase the Tribal Bonds, which the clients were then unable to redeem or sell because the bonds were illiquid and lacked a ready secondary market; and (c) misappropriating the proceeds resulting from those bond sales.

The WLCC was convinced to issue the Tribal Bonds through false and fraudulent representations by JOHN GALANIS.  Simultaneously, Jason Galanis, with the backing of ARCHER and COONEY, worked to acquire Hughes Capital Management (“Hughes”), a registered investment adviser.  Morton and Hirst were installed respectively as Hughes’ chief executive officer and chief investment officer.  Within weeks of taking control of Hughes, Morton and Hirst caused the entire $28 million first series of Tribal Bonds to be purchased by Hughes clients, primarily pension funds, but never disclosed to these clients material facts about the Tribal Bonds, including the fact that the Tribal Bonds fell outside the investment parameters set forth in the investment advisory contracts of certain Hughes clients.  In addition, Hughes’s clients were not told about substantial conflicts of interest with respect to the issuance and placement of the Tribal Bonds before the Tribal Bonds were purchased on these clients’ behalf.

In addition, after JOHN GALANIS induced the WLCC to issue a second round of Tribal Bonds, ARCHER and COONEY used $20 million of bond proceeds from the first issuance to buy the entirety of the second issuance.  As a result of the use of recycled proceeds to purchase additional issuances of Tribal Bonds, the face amount of Tribal Bonds outstanding increased and the amount of interest payable by the WLCC increased, but the actual bond proceeds available for investment on behalf of the WLCC did not increase.  The bonds purchased by ARCHER and COONEY were then used to meet net capital requirements at two broker dealers in which ARCHER and COONEY had interests.  COONEY also obtained a $1.2 million loan based on his purported ownership of the bonds, a loan he subsequently failed to repay.  In addition, millions of dollars in bond proceeds from the first and second issuances were used finance the acquisition of companies that the defendants and their co-conspirators acquired as part of a strategy to build a financial services conglomerate.

Hunter Biden’s name seemed to stay out of the scam pulled on Native Americans, in the sum of $60 Million, though his connections to Archer seem well-established.

Devon Archer has been convicted.

Hunter Biden is constantly in the news these days and is a known business associate of Archer, on multiple occasions.

Joe Biden still claims to be squeaky clean and wants to be your next President.

How can Joe Biden continue with the charade that he has no involvement in any of this?

Lunden Roberts is not the only person in America that would like to take a look at Hunter Biden’s financial records.

Biden at presser: ‘As usual, folks, they gave me a list of the people I’m gonna call on’
June 17th, 2021 Liberty Unyielding

LIGHTS OUT: Cyber strike against America’s power grid and energy infrastructure seeks to take down the nation and sow chaos so that bad actors can cover their tracks
June 17th, 2021 DC Clothesline

Homelessness Is Becoming A Crisis Of Epic Proportions In The United...

SAME PLAYBOOK: In 1983, Fauci tried to spread mass hysteria over...