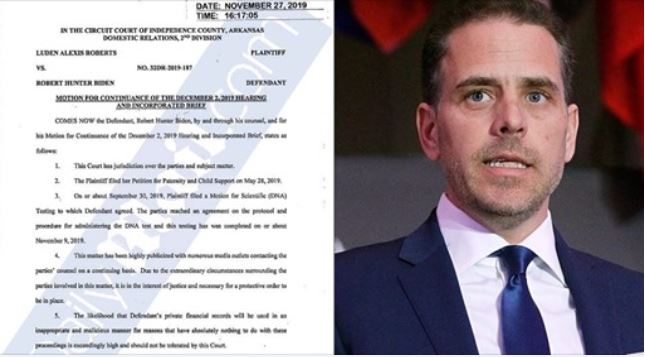 While the kids are playing with their toys, I figured I would sneak away to write a quick article about the latest information coming out of Hunter Biden’s current court case against Ms. Lunden Roberts.

Hunter, a Democrat with a perfect pedigree ( the literal ‘Senator’s son’ from that Creedence song), seems to be turning out to be even more reprehensible than we had thought … and, yes, that is an accomplishment in and of itself.

As you likely know, Ms. Roberts was an ‘exotic dancer’ at a strip club that Hunter visited, or so the allegations go.

Hunter, who has been in an out of rehab, likely for his alleged crack cocaine smoking habits, is the subject of a paternity case over the child he fathered (which he denied until science proved the child to be his) with Ms. Roberts.

Hunter allegedly ‘refused to pay child support for over a year’ and then refused to foot the bill for Robert’s $11,000 legal bill. Hence the on going suit.

Now, perhaps Hunter is just out of money and unable to pay for this child he fathered, perhaps he is the real victim here, right?

Well, according to a new report from the New York Post, that does not appear to be the case.

The son of former Vice President Joe Biden shares a ZIP code in the Hollywood Hills with celebrities such as Ben Affleck, Christina Aguilera and Halle Berry, according to documents filed in Hunter’s Arkansas paternity case.

The three-bedroom, three-bathroom mid-century home is valued at $2.5 million. It sits at the end of a private gated drive and includes a pool.

The property was sold on June 19, records show, but it’s unclear how much Biden paid for it.

One day after the sale, a former Washington, DC, stripper filed a petition for paternity and child support against Biden in Arkansas’ Independence County Circuit Court.

Quite frankly, I could care less if Hunter likes to smoke crack, frequent strip clubs, and allegedly have ‘sex toys‘ ‘used on him’ while at said establishments. The concerns I have are with how ripe this makes him, and his family, for being leveraged by hostile foreign powers.

However, when it comes to not paying for your child’s basic needs, while you have the money to do so and are allegedly spending thousands of dollars a night at ‘jiggle joints‘, then it becomes a different story.

I suppose every cloud has a silver lining, and in this disturbingly sad case, that lining is that this paternity case is resulting in the release of more information about the Biden’s business dealings and assets than, do nothing, Lindsey Graham has rooted out in the Senate.

‘Hunter Biden will be grilled under oath on January 7 about the money he made whilst sitting on the board of Burisma Holdings.

According to reports, Hunter Biden made between $50,000 – $200,000 a month sitting on Burisma, a Ukrainian natural gas company despite having zero experience in the field.

Rudy Giuliani has documents proving money was laundered through Ukraine, Latvia and Cyprus before it was paid out to Hunter Biden.

“All of a sudden Shokin gets this communique from Latvia that shows a $16 million laundering transaction — classic laundering transaction,” Giuliani said. “It goes from Ukraine, to Latvia, it’s disguised as a loan to another company to ‘Wirelogic’ I believe — it then goes to Cyprus, gets disguised as another loan — this is called “Digitech” then it’s dispersed as payment as board fees,” he added.

Giuliani added, “Now you don’t make two loans to make board fees unless you’re laundering the money. $3 million gets to Hunter Biden in that way.”

“That is a straight out violation of a money laundering statute,” he said.

As the famous song goes:

‘You can run on for a long time

Run on for a long time

Run on for a long time

Sooner or later God’ll cut you down

Sooner or later God’ll cut you down’ …

Biden On Hot Mic In Florida: ‘No One F**ks With A Biden’ (Video)
October 6th, 2022 Conservative Firing Line