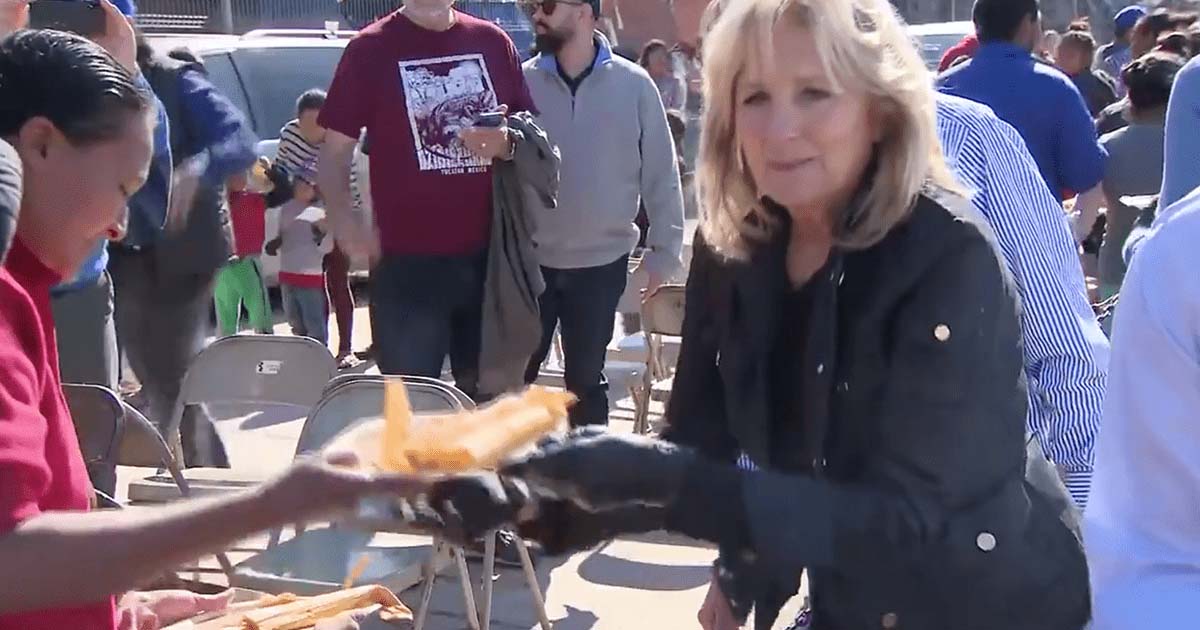 Do The Bidens really think that this is going to impress Americans when we have hungry people within our borders?

The Democrats care more about people south of the border, who are potential Democrat voters, than the people that are already here and equally hungry.

Jill Biden, the wife of former Vice President Joe Biden who is presently running for the Democratic nomination for president, was busy on Sunday with a photo op helping to pass out food for the holiday.

Now, it’s a good thing to feed anyone who might need it. According to Hot Air, they distributed about 1500 meals which only fed about half the people there. Biden called it “heartbreaking” and said “it’s not who we are as Americans.”

But the folks waiting there are there voluntarily, they can leave and go home. And it’s because of the policies of President Donald Trump that there now are fewer people crossing, leading to fewer people waiting, crossing dangerously or being detained. That’s far more effective as a policy than handing out food for a couple of hours or seemingly agitating for open borders.

Shall we note the policies in place when her husband was in office in the Obama administration? When they built what they now decry as “cages,” were responsible for a lot of hardship because their policies incited the overwhelming influx and actually turned children over to human traffickers because they didn’t check sufficiently on to whom they were turning them over? And didn’t resolve any of the appreciable problems?

It’s hard to look at it as much more than a political photo op to try to take a whack at Trump, especially when there are Americans in need in so many Democratic cities, for example San Francisco and Los Angeles, literally because of Democratic policies.

What about AMERICANS in need?

This reminds me of that time that Ted Cruz delivered Teddy Bears to kids in Mexico.

That was enough to lose my vote.

There are kids here who would have loved those Teddy Bears Senator Cruz.

Where in the hell are your priorities Mrs. Biden?

In Stunning Move, Bayer To Pull Glyphosate Products From Store Shelves Due To Massive Losses In Lawsuits
Sons of Liberty Media

Are You Going To Allow Your State To Be Locked Down For Most Of The Second Half Of The Year?
Conservative Firing Line