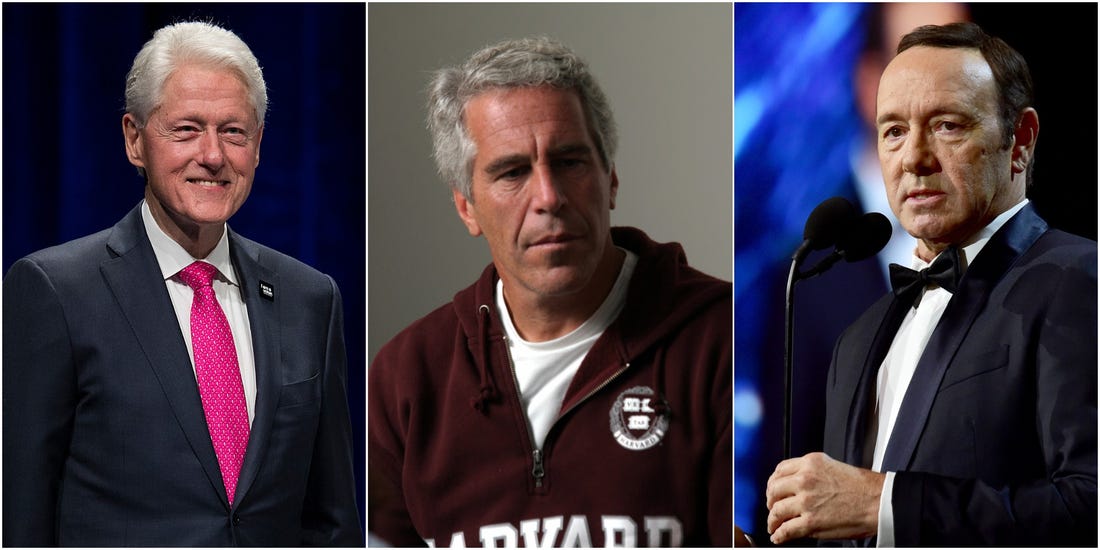 His third accuser committed suicide over the holiday and things are starting to look a bit suspicious.

Here’s the story on the latest convenient death from Variety:

Ari Behn, Norwegian author and and ex-husband of princess Märtha Louise, died by suicide on Dec. 25. He was 47.

“It is with great sadness in our hearts that we, the very closest relatives of Ari Behn, must announce that he took his own life today. We ask for respect for our privacy in the time to come,” Behn’s family spokesman Geir Håkonsund said in a statement.

Behn married princess Märtha Louise in 2002 and announced their separation in 2016. The divorce was finalized in 2017.

During an interview with Norway’s radio P4 in December 2017, Behn recounted an incident with Kevin Spacey when the actor hosted a Nobel Prize concert.

“I have a little #MeToo story about Kevin Spacey,” Behn said. “We were having a nice chat where we spoke about theater and drama, and the little theater, the Wick, a theater in London. We had a good conversation sitting beside each other. After five minutes he said ‘Hey, let’s go out and have a cigarette,’ then he grabbed me under the table right in the balls.”

Behn is the third Kevin Spacey accuser to die this year, following whistleblower Linda Culkin and the anonymous massage therapist who accused Spacey of sexual assault in an October 2016 session.

Again, this is the THIRD Spacey accuser to die this year.

From The Washington Examiner…

This marks the third Spacey accuser to die in 2019. In May, Linda Culkin, who accused Spacey, 60, of sexual harassment, was killed when she was struck by a vehicle in Massachusetts. In September, an anonymous massage therapist who accused Spacey of sexual assault died in the middle of a lawsuit against the actor.

There is another glaring coincidence in this story that needs to be mentioned.

Kevin Spacey is a friend, and otherwise connected acquaintance of Bill Clinton.

How deep did that “friendship” extend?

Birds of a feather, fly together…

From one of our previous reports…

Incidentally, Kevin Spacey just so happened to have flown on Jeffrey Epstein’s “Lolita Express” with Bill Clinton for a week-long “tour” of Africa, Gawker reported in 2015.

In 2002, as New York has reported, Clinton recruited Epstein to make his plane available for a week-long anti-poverty and anti-AIDS tour of Africa with Kevin Spacey, Chris Tucker, billionaire creep Ron Burkle, Clinton confidant Gayle Smith (who now serves on Barack Obama’s National Security Council), and others. The logs from that trip show that Maxwell, Kellen, and a woman named Chauntae Davis joined the entourage for five days.

That last name—Chauntae Davies—shows up elsewhere in papers unearthed by the various investigations into Epstein’s sex ring: his little black book. Davies is one of 27 women listed in the book under an entry for “Massage- California,” one of six lists of massage girls Epstein kept in various locales, with a total of 160 names around the globe, many of them underage victims.

Gawker’s report features a picture of Davies from her Facebook page where she’s topless and covering herself with just an arm.

Business Insider reported more on that flight earlier this year:

Multiple profiles and reports from over the years detailed Epstein’s active philanthropy and social life that kept him among the ranks of New York’s elite. One such report detailed his financing of travel to Africa with former President Bill Clinton and actor Kevin Spacey.

[…] This was one instance of Epstein getting friendly with Clinton, as the former president would take several flights on Epstein’s private plane in 2002 and 2003, according to logs obtained by Gawker in 2015.

Clinton lauded Epstein to New York Magazine as “a committed philanthropist” and said he enjoyed Epstein’s “insights and generosity” during the trip.

“Jeffrey is both a highly successful financier and a committed philanthropist with a keen sense of global markets and an in-depth knowledge of twenty-first-century science,” Clinton said through a spokesman. “I especially appreciated his insights and generosity during the recent trip to Africa to work on democratization, empowering the poor, citizen service, and combating HIV/AIDS.”

The meeting seemed to be by design, as Epstein said in 2002 that his elite social circle was a “collection” that he invested in.

“I invest in people, be it politics or science,” Epstein said. “It’s what I do.”

I wonder if this anonymous massage therapist and Epstein met a similar ending?

Spacey is a certified pervert and his accusers keep mysteriously dying.

Spacey is admittedly good friends with another pervert who has seen people die over and over, quite fortuitously for him.

People that might have dirt on The Clintons are still dying, even in 2019.

I’m not going to make any hard claims here, but knowing what we know about Bill Clinton, Jeffrey Epstein and Kevin Spacey…

…would it be totally unbelievable that Spacey cashed in a favor from Wild Bill?

Maybe Spacey is just lucky and maybe he’s a psychopath who is pulling all of this off himself, but he’s certainly connected to someone who could make these deaths happen for him.

We aren’t as stupid as they think we are.