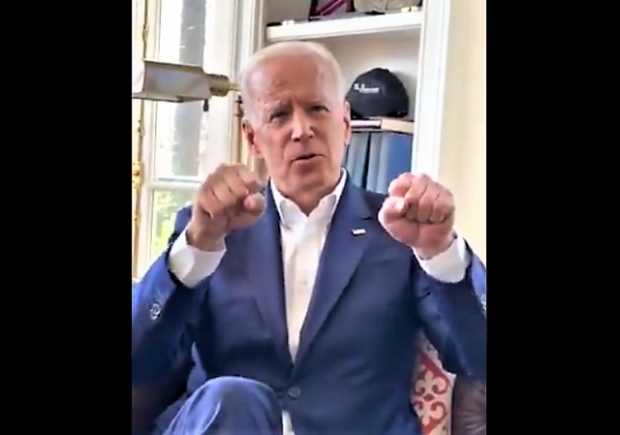 What are you hiding Joe?

Are you afraid that some REAL truth might come out?

Joe Biden won’t testify because he is afraid he will implicate himself.

With that said, let’s see what lies Uncle Joe has for us today.

There is no indication that Mitch McConnell and his Republican majority in the Senate are going to let the impeachment trial turn into a wide-ranging free-for-all.

Democrats desperately want to try to rescue their woefully inadequate impeachment case by locating evidence outside the record on which impeachment was based. At the same time, some Republicans wish for the day they can get Joe Biden, Adam Schiff and other Democrats on the witness stand.

Nancy Pelosi is playing games by holding back the articles of impeachment, and there is a good argument that Republicans should not play her waiting game and should just call a trial and get it done with on the basis of the record from the House. Kimberley Strassel writes, Pelosi’s Rolling Impeachment:

And as long as the Senate doesn’t hold a trial, Democrats can add additional “crimes” to their case against the president. House lawyers this week argued in federal court that former White House counsel Don McGahn must be forced to testify to the House. They told the court the House may “recommend new articles of impeachment” if Mr. McGahn’s testimony included evidence that the president obstructed special counsel Robert Mueller’s investigation.

How long will this charade go on? As long as Democrats can get away with it. Given their impeachment irregularities to date, it’s not hard to imagine Mrs. Pelosi sitting on her impeachment articles through next fall’s election campaign. That would deny Mr. Trump the ability to say he’d been acquitted, even as it assured a constant stream of negative, ever-evolving impeachment coverage.

The risk to Democrats is that the public loses tolerance for a cynical partisan ploy that makes a mockery of Congress’s constitutional duty. But Ms. Pelosi knows the press will dutifully peddle her “fairness” line, and at least for now she can use the delay to energize her base and further damage the president. If the public tide shifts, she can always change course.

Senate Republicans should schedule a trial immediately. Mr. McConnell has a majority to set the rules, and he has history, the Constitution and fairness on his side. Republicans also have a duty to spare the nation from the damaging precedent Mrs. Pelosi is setting. They can end the farce of endless, rolling, partisan impeachment.

But it’s still fun to think of Adam Schiff on the witness stand being grilled under oath on national TV about everything he has done with regard to Trump, including whether he or his staff leaked to the media and colluded with the so-called ‘whistleblower.’

It likewise would be fun to have Joe and Hunter Biden on the stand to demonstrate why it was in the national interest, not just Trump’s political interest, to seek an investigation as to what appears to be payola to Biden’s son in an attempt to influence the then-sitting Vice President.

So, playing along with this thought experiment, things could get really interesting if Biden, as he previously stated in early December, would refuse to honor a Senate trial subpoena:

Joe Biden is dismissing calls from President Trump and his allies that Biden testify during an impeachment trial in the Senate, saying any effort to compel his testimony should be viewed as part of a strategy to distract from the president’s conduct.

“No, I’m not going to let you take the eye off the ball here. Everybody knows what this is about,” the former vice president told NPR when asked whether he would cooperate with a subpoena. “This is a Trump gambit he plays. Whenever he’s in trouble he tries to find someone else to divert attention to.

”Asked a second time whether he would comply with a subpoena, Biden said: “No, I will not yield to what everybody is looking for here. And that is to take the eye off the ball.” He added, “No one has … one scintilla of evidence that I did anything other than do my job for America as well as anybody could have done it.”

Biden repeated that vow to defy a trial subpoena in an interview today with the Des Moines Register. Johnny Verhovek, an ABC News reporter who watched the interview, tweeted:

Correct. And the reason I wouldn’t is because it’s all designed to deal with Trump doing what he’s done his whole life, trying to take the focus off him.”

Asked if defying a subpoena puts him above the law, Biden said: “The grounds for them to call me would be overwhelmingly specious, but so, I don’t anticipate that happening anyway. But what it would do if I went — let’s say I voluntarily just said, let me go make my case…

Read the rest at LI…

Biden, and the rest of the Democrats, are desperately trying to fool Americans in the middle of an impeachment that is backfiring.

The only VOTERS that are buying impeachment are the brainwashed liberals who refuse to believe anything other than what their leaders tell them to believe.

Joe Biden has more to lose than gain by testifying before the Senate and he knows it.

MOST voters aren’t stupid and we know it too Joe.

I’m sorry your turn to be President is being skipped.

You would have given us so much to talk & write about.